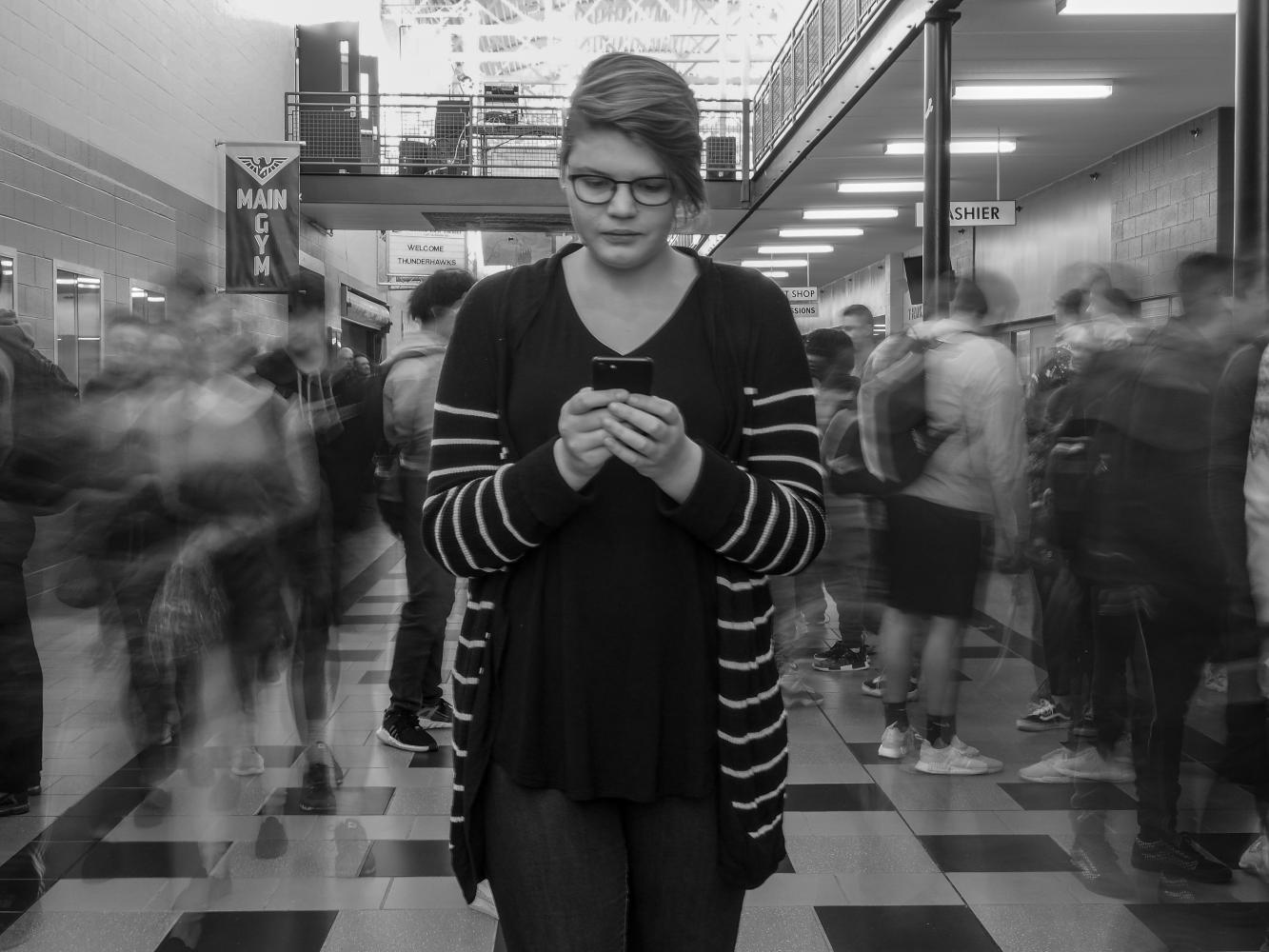 East junior Kaya West explains the impact social media has on her.

She has just arrived at home. While eating an after-school snack, she browses Twitter, searching for the latest updates in news. After skimming articles featuring the Trump Administration, disastrous wildfires and disease outbreak, she exits the application (app), venturing to Instagram. She clicks the icon, scrolling through the latest posts of her favorite follows and watching the stories of her closest friends. She appreciates this time, she enjoys the feeling of the connection until she glances up and asks herself, “What am I doing?”

East Junior Kaya West has been using social media for four years. Ever since she opened her first Tumblr account in seventh grade, the presence of social-networking sites has impacted her.

“I use Facebook and Instagram to keep up with friends. I mainly use Twitter to follow politics and news. I definitely use social media every day,” West told Spark. “I spend more time on the Internet than I did in the past and I’m really annoyed by it. But think it really depends on how you use social media because it can be helpful to have connections with others, but it can also be incredibly draining on the mind.”

“One of the reasons why social media is so popular is that it offers us ready access in order to attempt to fulfill the basic human needs that we feel,” Miami University Professor in Psychology and Anxiety-Related Studies Joshua Magee says. “We all like to connect with other people. We’re human. Social media gives us this new mode where we could be pursuing these motivations every minute if we wanted to.”

West explains how the communication and connections that social media provides allow her to reinforce important relationships.

“I have a family friend who lives in Turkey. The political climate there is not great so she can’t really leave and I can’t go see her. But she likes to watch my Instagram story which is really awesome,” West says. “I get to have a connection with a person who I otherwise wouldn’t talk to.”

According to Psychologist and Director of Training Matthew Heiner, the impacts of social media are determined by how the platforms are used.

“When people are using social media as a tool to connect with others or gain social support and satisfaction, that’s really great,” said Heiner. “When it becomes an obligation, problems arise.”

As shown by the Pew Research Center, Facebook and Youtube are the major platforms that appeal toward the majority of American adults. According to a TechCrunch article, younger Americans between ages 18-24 are more drawn toward Instagram, Snapchat and Twitter because of the easier accessibility and newer visuals that the apps possess.

“The reason social media is such a big part of my life is because it helps me connect with people faster and to a greater degree,” says East junior Tanya Kukreja. “I can communicate in the blink of an eye, whether I want to share a funny meme or ask a serious question.”

As of March 2018, 71 percent of teenagers were reported as users of multiple social media platforms. Between ages 18-24, 78 percent are Snapchat users. Within this demographic, 71 percent are Instagram users and 45 percent use Twitter.

Associate Professor in Miami University Department of Psychology Elizabeth Kiel says that there is a connection between social media use and social environment.

“There is research that increased social media use can lead to feelings of inclusion and connection,” Kiel says. “But [social media] can also lead to an increased negative mood and feelings of loneliness which depends on one’s perception of their social standing already.”

West believes a dependence on social media is more likely to develop when deeply personal relationships are lacking in reality.

“If you’re not getting strong connections in your real life, it’s easier to get attracted to social media because of the connections that it provides. And even though the internet has been good for making friends,” West says. “It can’t replace real human connection.”

A study conducted by the Pew Research Center reports 94 percent of United States (US) teenagers are social media users, as opposed to 69 percent of adults.

“I think [social media use] is probably more for teenagers because of how it concerns what peers are doing,” Kiel told Spark. “Fitting in with peers seems to be heightened during adolescence.”

According to a study done by Common Sense Media, a non-profit organization based in San Francisco that advocates for safe technology use for children, the average teenager spends approximately nine hours of their daily life online. This compared to six hours spent for ages eight to 12 and 50 minutes for kids between zero and eight. Of the teenagers aged 13 to 17, 60 percent consider their time spent online a major problem and 41 percent say that they overuse social media.

Although social media is not formally recognized as an addiction, Joshua Magee explains how the presence of social media can consume time and decrease productivity in one’s life.

“Many people colloquially find it very difficult to disengage from social media, finding it to disrupt their engagement in other activities,” Magee told Spark. “They found themselves using social media instead of doing work.”

West describes how social media, because of its captivating qualities, makes her less likely to accomplish daily tasks.

“I’ll be on Twitter when I have so much to do and it’s frustrating because I’m not stopping when I know I should,” says West. “Whenever I’m not on social media, I feel like I’m missing something.”

As reported by Centered Health, a rehabilitation center for teenagers located in Malibu, California, teenage happiness is negatively affected by social media. The center reports that using social media for one hour a day reduces overall happiness by 14 percent.

Centered Health explains that because of the rapid communication that social media provides, teens have easy access to the comments that may trigger their sadness and fuel the constant comparisons amongst peers.

“It’s creating this false expectation for life and how one should live,” East sophomore Leighton Heiner says. “It sets that standard for comparing yourself to others and feeling inadequate.”

According to a 2018 study done by Pew Research Center, social media has a large impact on teenage bullying. 59 percent of US teens have experienced some type of abusive behavior online. 42 percent of teens said they have been called offensive names online. 32 percent have had false rumors spread about them on the internet and 16 percent were the target of physical threats.

Magee says that increased social media use has created a strengthened platform for cyberbullying.

“Social media permits anonymity,” says Magee. “It allows a large number of people to pile on an individual and really intensify the experience for the victim.”

In recent studies by Child Mind Institute, teenagers and young adult social media users who spend a larger amount of time on Instagram, Facebook and other social media sites have seen an increase in cases of depression from its users. The reported depression rate went from 13 percent to 66 percent, demonstrating a correlation between social media use and depression.

According to an article from Harvard University, the constant communication, comparisons, pressures and aesthetics of social media also connect to mental health concerns like anxiety.

“When I look at them, I want them to look really nice and perfect,” West says. “It has to represent exactly who I want to be and I think it’s a combination of me having OCD and also just a general anxiety of wanting the person I present to the world to be an ideal version of myself. It’s stressful.”

West believes that it is necessary to recognize the impacts of social media on society in order to evolve as a society.

“It would be silly to ignore the effects that social media has. There are two camps of people who have thoughts about social media,” says West. “One group thinks social media is fantastic and the other claims that everyone is addicted to it. Instead of being lumped into one of the two, it’s important to have more complex discussion to generate opinions.”