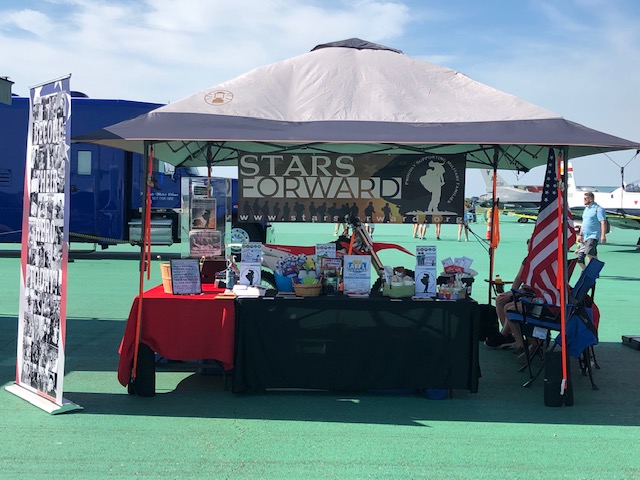 Joy and tears erupted across the wave of faces gathered at the airport, awaiting the plane carrying their loved ones to land. Eyes glistened as Steve Adkins and his wife saw the sign with their names written on it and approached their family. Between the prolonged, warm hugs and sappy reunion, Adkins could not have been happier to be home once again.

“[Coming home from Afghanistan would have been] financially tough, upwards of $2500,” Adkins says. “[Stars Forward] covered our rental car and paid us back for our already bought plane tickets. They even gave us a couple hundred bucks on a gift card to spend.”

Stars Forward, a new, Ohio-based charity, works to bring active military personnel home to their families in times of both family emergency and celebration.

“If there’s a soldier out there in the world who can get leave time from the military, we cover all of their travel expenses,” Executive Director Diana Mouring says. “It doesn’t matter whether they’re stationed away from home or deployed away from home, we’ll help them either way.”

The organization started as just an idea to give back to the military, but it was turned into a full-fledged nationwide nonprofit by Mouring and her husband in 2019.

“[My husband] Rick actually has military ties in his family going all the way back to the Revolutionary War,” Mouring says. “So, when they started thinking about ways to give back, they had this thought that they wanted to help the military because they feel like the military was responsible for the type of men they had become.”

Even after the initial idea was generated, the plan to start the organization was not set into motion until after the unexpected passing of the founder’s father.

“When that happened, it no longer was just an idea to bring this to life,” Mouring says. “We are doing all of this in honor of Rick’s father’s passing.”

One of the first things they had to decide on was the name of the nonprofit. The name “Stars Forward” comes from the fact that, when soldiers head into battle, the stars on their uniforms are always facing forward, never retreating.

“We felt like that was a cool way to say we’re putting our military first,” Mouring says. “We’re making sure that the stars are always forward, even within our own organization.”

In order to figure out what they could do to help, the Mouring family attended Family Readiness Groups for each branch of the military. These are command-sponsored organizations that provide information and emotional support to family members, usually spouses, while their loved ones are serving.

“We asked them: ‘There are all kinds of things that are being done for you; what is something that’s not?’” Mouring says. “The [main] answer we got back was a resounding ‘travel.’ Emergency travel is so hard for them.”

Stars Forward differs from many other military-oriented organizations because it focuses on active military as opposed to veterans and those who use the organization’s services are not expected to pay back any of it.

Adkins first heard about the nonprofit through a friend of a friend while asking around on Facebook if he and his wife, Seda Adkins, could borrow a car while visiting home. He was linked to Stars Forward’s website, where he submitted a request for financial aid.

“It had been almost five full years since he had been home to see his family, and his family had never gotten to meet his wife,” Mouring says. “Upon his return from [deployment in] Afghanistan, we were able to fly him and his wife home for a huge family reunion party that they had right here in Cincinnati. It brought his whole family together.”

While Stars Forward would love to bring any soldier home at any time, they can only bring home soldiers that are able to get leave from the military. In order to find soldiers who are eligible, Mouring contacts chaplains in the military. These are people who inform soldiers when something has gone wrong in their family.

“We felt like that was a cool way to say we’re putting our military first. We’re making sure that the stars are always forward, even within our own organization.” – Diana Mouring

“We go to chaplains and say, ‘We’re a smaller organization [that is just] getting started,’” Mouring says. “‘If you happen to have a soldier that truly needs to get home or who you feel is in need of our services, please reach out to us and we’ll tell you whether or not we can afford to bring them home.’”

As Stars Forward is a newer nonprofit, money is very tight. Without many grants or sponsors, the main source of income is fundraisers.

“We took most of our summer this year to attend festivals,” Mouring says. “We called around to local businesses and asked for donations. Then, we were able to put those into raffle baskets, and we provided a ticket in exchange for a donation to our organization. Through doing that, we [raised enough money] to bring our first soldier home.”

The Mouring family did not accomplish this feat alone, however. Sandy Nagel and June Reiter both joined the team of around 40 volunteers early in Stars Forward’s development after hearing about the cause from Mouring.

“It hit a nerve because it happened to my dad when he was in the Korean War,” Nagel says. “He had to get home because his father died, and he had such a hard time getting there that he didn’t make it [to the funeral] in time. I don’t want to see anybody else’s family members not being able to get home for an important event.”

According to Nagel, Stars Forward is going to make a big impact within the community in the years to come.

Reiter believes the Mouring family are the best people to have started and directed the nonprofit.

“Diana and her husband are a wonderful couple,” Reiter says. “They’re very passionate about what they’re doing. They purposefully went to the local bases to find out what the servicemen and women need as opposed to just assuming they need this.”

Both women plan on continuing to volunteer for Stars Forward and helping it grow into a bigger and better organization than which it had started as.

“We are working to bring at least three or four soldiers home next year,” Mouring says. “We want to find more monthly donors and get them involved with the organization, continue to find strong volunteers like the ones we currently have, and basically take Stars Forward to the next level. We’re approved to be a nationwide charity, getting there is just gonna take some time.”