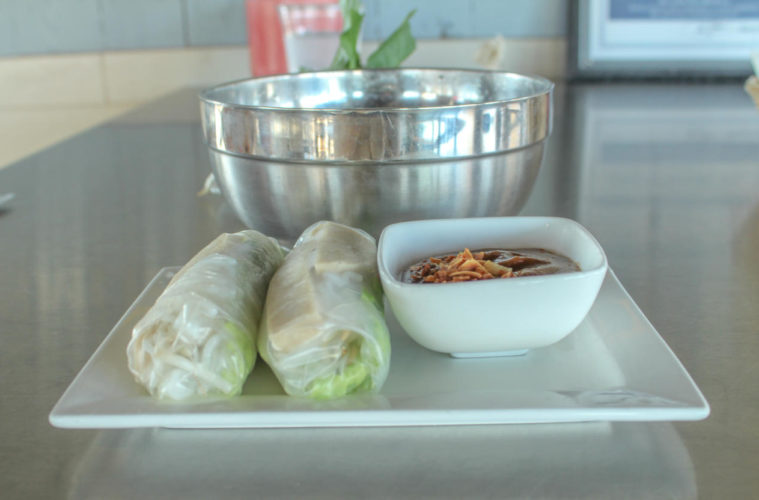 Asianati has hosted “Asian Food Fest,” an event with vendors from Asian restaurants across the Cincinnati area,  in downtown Cincinnati for 10 years, but the roadblock of the pandemic led the team behind “Asian Food Fest” to get creative. “Asian Food Week”, hosted Nov. 2-8 allowed the mission to still be carried out, while complying with guidelines related to the pandemic. “Asian Food Week” aims to promote Asian culture, just as Asianati strives to do throughout the year through other endeavors like their restaurant directory.

“The Asian American Cultural Center of Cincinnati [ACAC] were the ones who started this event called Asian food fest that happens downtown every year. This year we have no choice but to cancel it,” Co-founder and chairman of Asianati Koji Sado says. “We were still looking for ways to help support Asian businesses and get customers back in so we came up with an idea of Asian food week.”

Many participating restaurants adopted a $20 special for “Asian Food Week,” with most containing an appetizer, entre, and desert, while others chose to sell a secret menu item throughout the week. 38 restaurants across the Cincinnati area participated, with dishes from curries to bubble teas all showcased.

Manager at Saigon Noodle Bar, Taylor Le, was approached to participate in “Asian Food Week” through a Facebook message, and found that the week brought in business that Saigon Noodle bar wasn’t typically getting. According to Rally for Restaurants, a grassroots initiative working to support the restaurant community in times of need, average revenue for restaurants in the Cincinnati area dropped 43.8% since Feb. 18. Due to the pandemic, restaurants have faced unprecedented struggles, and this week was able to bring more customers in.

“It definitely brings in newer customers that we haven’t seen before, especially those that don’t live in West Chester [where Saigon Noodle Bar is located],” Le says. “Asianati is mostly focused around downtown so it’s nice to see people from other parts of town come and experience other restaurants.”

Sado has seen the participating restaurants positively impacted, proving that the week has worked to help fulfill Asianati’s mission of highlighting asian culture.

“We’re getting comments back from [participating restaurants that they really appreciate us helping out, a lot of businesses were getting hit pretty hard with COVID,” Sado says. “There are a lot more customers who came in who previously didn’t know that our business even existed.”

Kung Fu Tea, with locations in Kenwood and Mason, took part in the event as well, opting to offer a Secret Menu Winter Melon Lemonade with Nata Jelly.

“A lot of people came in to get the special,” Kung Fu Tea employee Julianne Lambert says. “We didn’t see a huge influx in customers, but it definitely had an impact.”

12 volunteers including Sado worked to organize this event, and will again in 2021, after this year’s event was such a success.

“There was really no cost to them,” Sado says. “We were trying to just help them, promote their business and then get the awareness out, and I think that worked pretty well.”

In another effort to continue to promote Asian restaurants within the area past “Asian Food Week,” Asianati held a giveaway for customers.

“We bought a bunch of different cards from the [participating restaurants], and we ended up close to 40 gift cards,” Sado says. “We were able to give out those gift cards so that they can go out and help them out again in the future.”

“Asian Food Week” ran a week long, but the impact lasts long after those seven days. Asianati’s website hosts a directory of Asian restaurants throughout the Cincinnati area, along with showcasing where specific dishes like ramen or dim sum can be found. The directory can be accessed year round and is updated routinely, also containing staff picks and hot and new restaurants. Even without being able to carry out “Asian Food Fest” as in the past, other endeavors have allowed the ACAC and Asianati to spread the joy of good food.

“The overall goal is tied to the lead initiative for ACAC, which is to bridge and connect people so they can learn about the Asian culture around Greater Cincinnati,” Sado says. “Our purpose is really to continue spreading the good news and great culture that’s really around Cincinnati that a lot of people still aren’t necessarily aware of.”