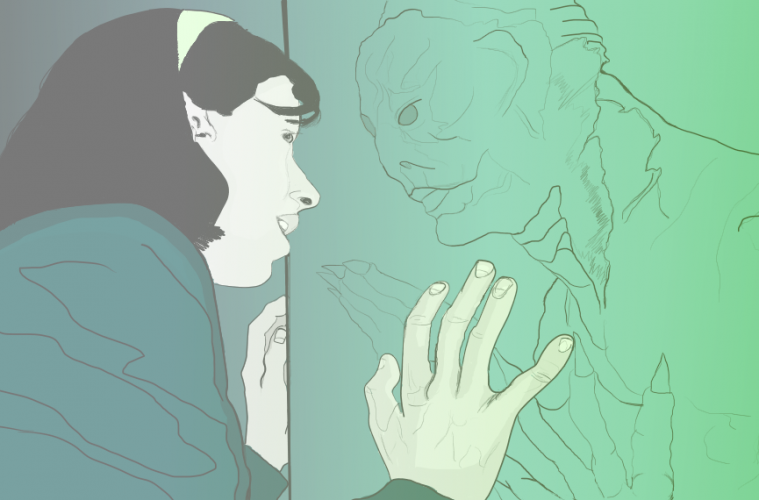 The Shape of Water

Thanks to his incredibly vivid imagination, Mexican-born director Guillermo Del Toro has long been making waves in the world of cinema. Del Toro uses his knack for world-building to contrast a magical atmosphere with daunting reality in movies such as “Pan’s Labyrinth” and “The Devil’s Backbone.”

His latest film, 2017s “The Shape of Water,” is no exception. Del Toro has written and directed a bizarre and color-coded world that convinces his audience that it is merely a hidden part of our own.

Elisa (Sally Hawkins), a mute custodian living in 1960s Baltimore, discovers that researchers in the scientific facility that she works in have discovered and captured a creature whom they call the Asset (Doug Jones). As the Asset is indistinguishable from “The Creature from the Black Lagoon,” audiences are bound to be surprised when a budding romance is reciprocated between it and Elisa.

Del Toro very carefully and successfully sells the unconventional romance by crafting an unmistakable connection between the two. Elisa, unable to speak, resonates with the creature in being seen as imperfect by those around them. The romance that develops serves as a symbol for the pair discovering hope in each other when the rest of the world has not provided it for them.

Elisa’s habit of watching old musicals with her neighbor Giles (Richard Jenkins) is only an additional layer to what gives this movie its old soul. However, the horrific tones, provided mainly by Richard Strickland (Michael Shannon) who tortures and intends to kill the creature, serves as a brilliant contrast that keeps “The Shape of Water” somewhat grounded in reality.

The individual sets in the film manage to create a cohesive world in which the characters live, all of them laced together by the vivid feelings of classic hollywood along with a green monochromatic tint. This aesthetic creation is embodied in Asset, whose strong tones classic Hollywood’s silent wonder play as much of a role as his green.

Winning the 2018 Oscar for Best Picture at the 90th Academy Awards, “The Shape of Water” will undoubtedly be remembered for the brilliant performances by the cast, the romantic and whimsical feelings that the movie offers, and the incredible attention to detail put forth by Del Toro in making our own world seem incredibly magical.