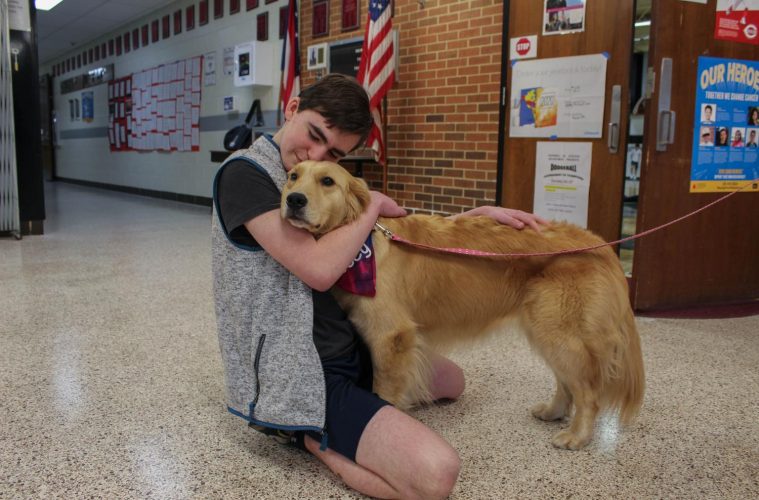 Sarah Oupere, like any eighth grade student, has good days and bad days. But on her bad days she feels better knowing that her friend Zooey is there to help.

“She helps me feel better when I have a bad day,” Oupere said. “She’s a very amazing dog.”

Zooey, the three-year-old golden retriever, has been added to the Hopewell Junior family as the school’s own therapy dog to help students with their mental health.

Zooey’s job at Hopewell Junior varies from day to day. According to vice principal Leanna Webber, she will walk around during class changes and can be called in to help students unwind.

“There are a number of students who’ve been regularly meeting with [Zooey] daily,” Webber said. “Then we have a number that can ask [to meet with Zooey] here and there.”

Even though Zooey’s presence has only started since the end of holiday break, she has already made an impact.

“One particular student hardly would say anything before [Zooey came to Hopewell], but he will talk the whole time he pets her,” Webber said. “I’ve seen kids calm down when they’re upset, and people are just very excited.”

The idea to get a therapy dog came to Webber during a meeting with a student’s family. When it came to the student’s time to brainstorm ideas on what would help them in school, he asked for a service dog. When it first came up, Webber was against that idea.

“By the end of the meeting, we agreed to a fish,” Webber said. “That really got us thinking, you know what, why not? Let’s look into it.”

The dog has affected some of the students’ attendance – claiming they want to come more because of Zooey.

“One student told me that he was going to come to school now every day because of the dog.” said Webber.

Even the staff has felt better with Zooey. Webber said that the staff debates whose meeting she goes to. Zooey continues to have an impact on every one of the staff members.

“We have a staff member who has never had a dog, and when she met Zooey, she said ‘I want a dog.’ so she adopted one.” Webber said.

Zooey comes from an organization called Circle Tail; their mission is to provide service and hearing dogs for people with disabilities at no cost to the individual. Webber said that Circle Tail’s primary goal is to train the dogs to become service dogs, but if the dog is not able to pass the test perfectly, like Zooey, they are moved to the therapy dog program.

The program that Zooey comes from is the Facility Canine Therapy internship at Circle Tail. The dogs are placed in the school for a period of time, then they can be kept by the school or the dogs can be taken back. Leslie Kreiner, Circle Tail volunteer and dog foster parent, said that their program started in January with six dogs in it, and they all finished the program in May. All organizations that have engaged in the program have decided to keep their dogs for permanent placement.

“We will be charging $1500 for the permanent placement. Our dogs are valued between $17,000-$20,000 per dog. We make sure that all the staff who will be handling the dogs at the schools goes through a training program at Circle Tail,” Kreiner said. “In addition, all host families have to go through additional training and a home visit. I follow the dogs at their placements to observe, offer assistance, and troubleshoot issues that arise.”

During the day, Zooey is taken around with many different handlers, including Emily Colbert, an Intervention Specialist at Hopewell Junior School. Colbert noticed a difference in her students when in the presence of Zooey.

“Zooey has also made a huge impact on my students who have a hard time returning to academics after a situation or interaction that causes them to have high anxiety levels.” Colbert said.  “Zooey is able to sit with or lay on my students and it calms them down a lot quicker than any other intervention I have ever tried.”

When Colbert heard of the opportunity to be a handler for Zooey, she thought it was a great idea to help with her students.

“I saw the potential for opportunities that Zooey could help my students both academically and socially-emotionally, so I quickly volunteered myself to be a handler.” Colbert said. “My personal love for dogs might have also been a motivating factor too.”

In some cases, Zooey will go to classes, including Savannah Vetter’s eighth grade science class. Zooey has a pad that she will lay on in the class as it starts, but when it comes to a more relaxed time, she goes around to say hello to everyone by letting everyone pet her.

Seventh grade student Taylor Hill said that if someone feels down they can go to Zooey and they will feel better.

“Zooey is making some of the kids who I never see smile, smile,” Hill said. “Zooey has gotten a couple of my friends more focused and excited about school.”

Kids with allergies or a fear of dogs are advised to simply stay back from Zooey, and Webber said that they have not had any complaints about her so far. Some kids are still wanting to pet her despite their allergy.

“There’s a lot of kids that go ‘I’m allergic but I want to pet her anyway.’ And I go, well go wash your hands,” Webber said. “I check with the nurse regularly because I figure she would hear [about any reaction] first.”

Zooey does even more than just calm kids down, she is also helping students with their vocational skills.

“In one classroom, they have a list of Zooey things that have to be done everyday, including taking her out and cleaning up after her,” Webber said.

After this eye opening experience, Webber said that she was thinking of fostering another dog.

“I have eight weeks in the summer [total] and that I have four solid weeks off [to foster a dog],” Webber said “I could foster a puppy for the summer.”

Colbert said Zooey has helped the students with life skills that Colbert would not have been able to teach them otherwise. Zooey has allowed the kids to calm down quicker after something happens, even beyond school. She also makes them excited to get to spend time with her.

“My classroom has always been a positive learning environment and safe space,” Colbert said. “Zooey’s presence has increased that positivity in ways I didn’t even know were possible.”