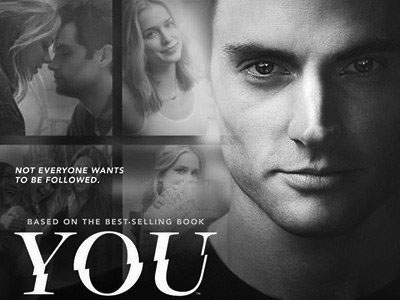 Picture this; an old, creeky bookstore, the young-hip manager lurking throughout the scattered shelves while placing books on aged shelves, dust flies. His true self stays hidden as he focuses on finishing the day, just to put his nose back into the books.

On Dec. 26, 2018, viewers, were intrigued when the main character of a new, popular Netflix Original series “You,” Joe Goldberg (Penn Badgley) made eye-contact with the fellow main character, Guinevere Beck (Elizabeth Lail) as she was simply looking for a book in his store, Mooneys.

An instant connection is formed, in Goldberg’s eyes that is, which makes the viewers wonder why his aura is the way it is. He vows to himself that he will not let anything stop him or get in his way to get the girl.

The Goldberg-narrated show gives clarity to the audience as he digs into a stalker lifestyle. Things heat up when he finds her social media platforms and gets her contact information.

The thriller truly takes a suspenseful turn when he decides to follow her home and peer into her window. Then he started stalking her all the time, and whenever conflicts arose or a man was treating her poorly he would step in.

The time came for him to make his move,  and swoop in and save the day and he saw her lying on subway tracks after drunkenly stumbling in. With this heroic rescue, he got an in. With this incident, he was able to snatch her phone to know exactly what is going on with her life.

With the additional characters at play in the show, it created depth but also confusion in keeping track on who is who and what relationship is what. This kind of regular activity within shows gives the show more to think about but draws away from the in-depth look at the stalker, himself.

Things start to progress as he involves himself with her friends, her work and made the relationship official; but once her boy-toy Benji went missing, others from Beck’s life started to disappear as well.

Without spoilers or eulogies, the love that Goldberg had for Beck threatened it all. He truly was willing to give and take anything for her. Omitting the creepy vibes, Goldberg made myself and many other viewers curious to what would come next.

Renewed for the second season, twists and turns await as viewers don’t know what to expect next. Overall, I am anxiously awaiting to see what and who will come next given the circumstances of what is left.