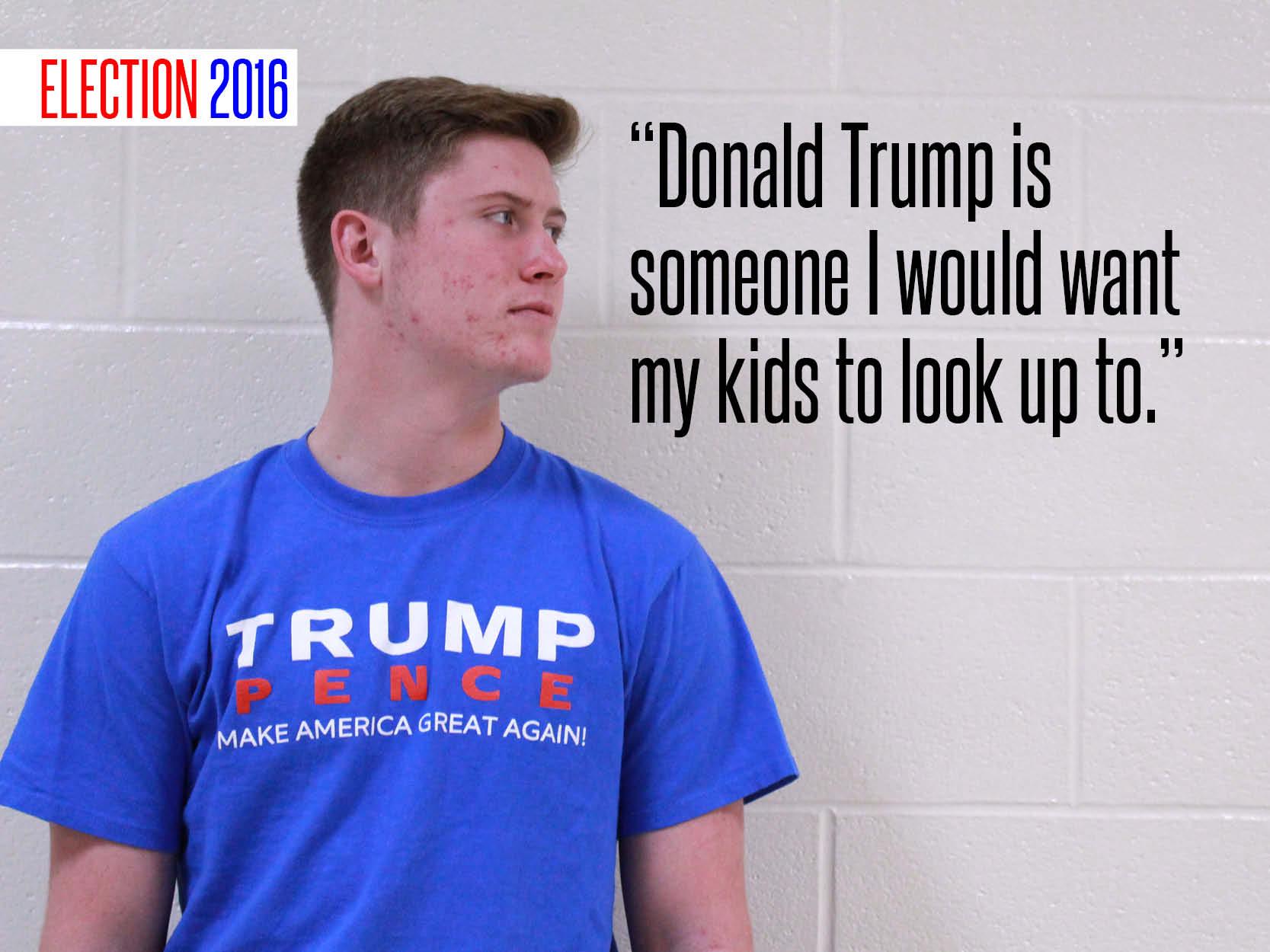 The woman with 3,000 deleted emails. The man with 75 lawsuits. Both viciously competing for the title of President of the United States and a chance to make their mark on history. Republican nominee Donald Trump wants to create a “great” America with more immigration control, less deficit spending, and no terrorism.

With people all over the nation cheering him on and supporting him, Trump has become immensely well-known with both supporters and opposers. Trump won East’s mock election with 41 percent of the vote, while Democratic nominee Hillary Clinton came in second with 34 percent. East sophomore Kyle McDonough is one of the hundreds of students who elected Trump.

“America is struggling right now with social issues and immigration, and the economy isn’t going as well as it could be,” McDonough said. “I think Mr. Trump would be the best option [for president,] because he has a background not in politics but in business, dealing with all kinds of people and that can translate into office.”

One of his first appeals to voters was having the background and experience of a businessman, making him more relatable to Americans compared to other politicians.

“Our country would improve with [Trump] as our president,” McDonough said, “[He would bring] a lot of leadership to the office and he’s a people person, so he knows how to interact with other countries on foreign policy.”

East Junior Theran Bowra also supports Trump and believes the candidate is a hard working businessman and that others should aspire to be as successful as him.

“Our country would improve with him as president because we [would] expand our businesses,” Bowra said. “This will allow our country to thrive.”

One of Trump’s most well-known ideas to improve America is to deport all illegal immigrants and to build a wall on the Mexican-American border. According to Pew Research Center, 66 percent of registered voters who support Trump in the general election call immigration a “very big problem” in the country, and 79 percent of Trump supporters favor building a wall along the entire U.S.-Mexico border. Among Clinton supporters, only 10 percent favored building a wall.

“Building a wall would make people who want to come into [America] go through the same process as everyone else,” McDonough said.

McDonough believes building a wall would be beneficial by keeping illegal immigrants out, wants to stop refugees from the Middle East from entering the country and supports background checks on people who have been allowed into the country to prevent terrorism.

Along with his immigration views, Trump has acquired support for his economic policies. The Committee for a Responsible Federal Budget estimates Trump’s future plans will reduce money going into federal coffers by $10.5 trillion in just the first decade. Bowra believes America is sending too much money to wealthy foreign nations which is part of why the country is going into trillions of dollars in debt.

“We need to make those countries pay and support their own citizens,” Bowra said. “Our country has no business in dealing with all these countries’ foreign affairs. We are spending too much money on things that don’t help the American people.”

Having eight successful business ventures and 11 failed attempts since 1974, according to the International Business Guide, Trump has the knowledge and background of being in the business world and dealing with money.

“Donald Trump has been around money his whole life,” East Junior Zoe Lape said. “He has experience with how to use it well and what to spend it on.”

In addition to supporting Trump for his foreign and economic policy stances, McDonough respects Trump as a responsible and grounded businessman and person in general.

“He is someone I would want my kids to look up to,” McDonough said. “They can see the struggles he’s had and the triumphant success he’s made in his life, and kids should want to be like him.”