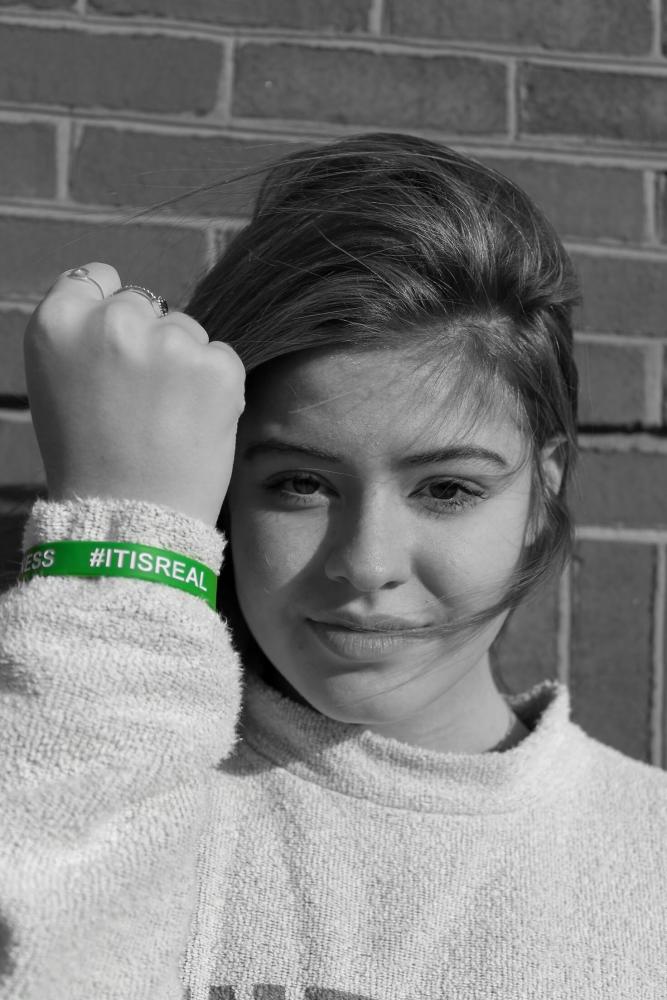 East senior Keeley Goldberg smiles as she sees bright green wristbands adorn the wrists of her classmates. A flash of green opens a nearby locker. Another green wristband picks up a fallen pencil. A beam of green fills an empty water bottle with water.

Green is the color chosen to represent mental health awareness. It is also the color of the silicone bracelets Goldberg sold as a part of her #itisreal campaign.

Throughout her life, Goldberg never understood why she would panic in certain situations or why she would have to leave school early because of an upset stomach. It wasn’t until her junior year of high school when she had the answer.

“I am diagnosed with anxiety, and I didn’t figure it out until last year. When I was diagnosed, I told people and they didn’t care, or if I freaked out in certain situations they didn’t understand. Some people even thought I was faking it,” Goldberg says. “So that’s why I’m saying it is real and [mental health] is affecting people and is hurting people. Mental illness is not a joke.”

The idea came to Goldberg in August of 2019 and she started to sell bracelets in October. She sold 222 bracelets as a way to spread mental health awareness. She earned a total of $667, and all of the proceeds went directly to East Hope Squad. Goldberg believes that Hope Squad is trying to prevent stigma around mental illnesses, and the teachers and students in Hope Squad have made an impact in her life.

“Everyone [on Hope Squad] was selected for a purpose. They represent the school as being positive and happy, and there are so many teachers that are in Hope Squad that have made me a better person,” Goldberg says. “I wanted to give them a thank you for being there and being selected because they’re [in Hope Squad] for a reason.”

Goldberg gave Hope Squad the money on Jan. 9. as a way to show her appreciation to thank them. One of the Hope Squad advisors that changed Goldberg’s vision on teachers was East government and psychology teacher Justin Dennis. He believes that Hope Squad tries to open up the conversation that “it is okay to not be okay.”

“We all say we want to change the world or make an impact. But you have to do the work and [Goldberg] stepped up. I’m so proud of her and what she did.” -East government and psychology teacher Justin Dennis

“[Giving Hope Squad the money]  was an unbelievable gesture and unbelievable thought on her part,” Dennis says. “We’re going to do our best to reach more kids [with the money] and organize more activities where kids feel that they’re not alone and that if they are having any type of mental struggle that they do have people here that are willing to support them.”

Dennis believes that starting #itisreal shows Goldberg’s courage to be able to show vulnerability. He realizes that as a teacher, he needs to acknowledge mental illnesses because students are not going to learn until they defeat their own mental struggles.

“The best thing about Keeley’s idea is not only spreading awareness, but that she wanted to see an impact in her own community,” Dennis says. “We all say we want to change the world or make an impact. But you have to do the work and [Goldberg] stepped up. I’m so proud of her and what she did.”

East senior Hannah Johnson and close friend of Goldberg understands firsthand the impact mental illness has on a person.

“A lot of people in my life struggle with mental health, and it has definitely helped me see the world differently,” Johnson says. “I know what they’re going through because I deal with mental health as well. It’s really sad to see people struggling and to feel like they’re not being properly represented.”

Johnson bought a bracelet from Goldberg. She believes that spreading awareness is the best way to stop the stigma around mental illnesses.

“I think that people are scared to come forward. So saying it is real is so true,”Johnson says. “It’s not just a phase – it is real and something people struggle with. It’s something that shouldn’t be passed over, and [the bracelets] are a good way to advocate it.”

Along with the bracelets, Goldberg posts encouraging messages on her Instagram and Twitter. She also wants to carry #itisreal with her in her future years and teach the principles of it to students as either a teacher or counselor.

“No matter what I do, I want to talk about how important mental health is,” Goldberg says. “I want to prove to people that you are not alone. You’re not your diagnosis. There are ways to get around it, and there are people like Hope Squad to help you.”