Light Up the Night

The entire street waits in anticipation. Cars line up along the road. The pure feeling of excitement slices through the thin, cold air. Eyes search the face of the house, straining to see anything and everything.

Suddenly, the entire yard illuminates with gleaming and shimmering lights in an array of colors. The lights dance around the house and lawn to the tune of “I Want A Hippopotamus for Christmas.” 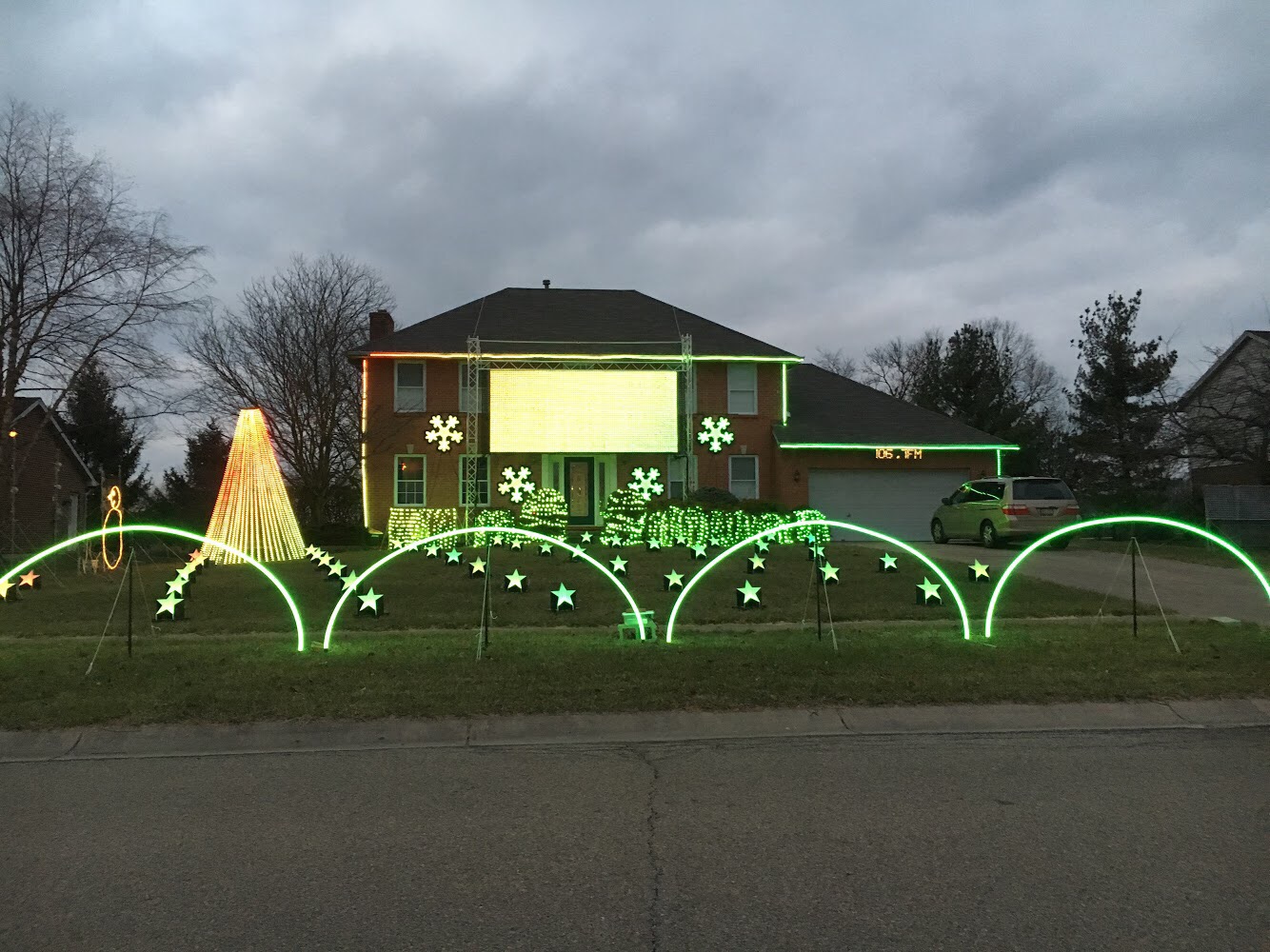 The Hormann’s lights are flashing, with the radio station to listen to shown above their garage with a smaller light screen.

The holidays are a time many people look forward to, when the night becomes incandescent with lights. However, very few cover their house head to toe with such displays, that is until the Hormann’s came to town.

Greg Hormann, along with his wife and elementary school aged children who live in Liberty Township, have been creating light displays since 2000. It’s grown every year with the addition of more displays and complex software designs. This display attracts a large number of visitors every night. However, the Hormann’s have kept their electrical bill at 80 dollars.

“I’d have to say that my favorite part of the show is the clear intent and desire to bring joy to others,” says Ganote. “This time of year can make anyone a little crazy with all the shopping and preparing for family gatherings, so it’s nice to see such clear effort and care this time of year, put forth to benefit others.”

When the Hormann’s show started, it had a few simple lights around their windows and bushes.

“The first year was totally to just prove I could do it,” says Hormann, who works in Information Technology (IT) at Proctor and Gamble. “The next year I came up [with] some really cool ideas.”

This year, their show has evolved to include 44 stars that cover their yard, a countdown clock, and a radio station that visitors can tune into. However, the most obvious difference between then and now is the 18 by 8 foot screen that covers the front of their home. To get the screen onto their home, the Hormanns had to use a giant lift. 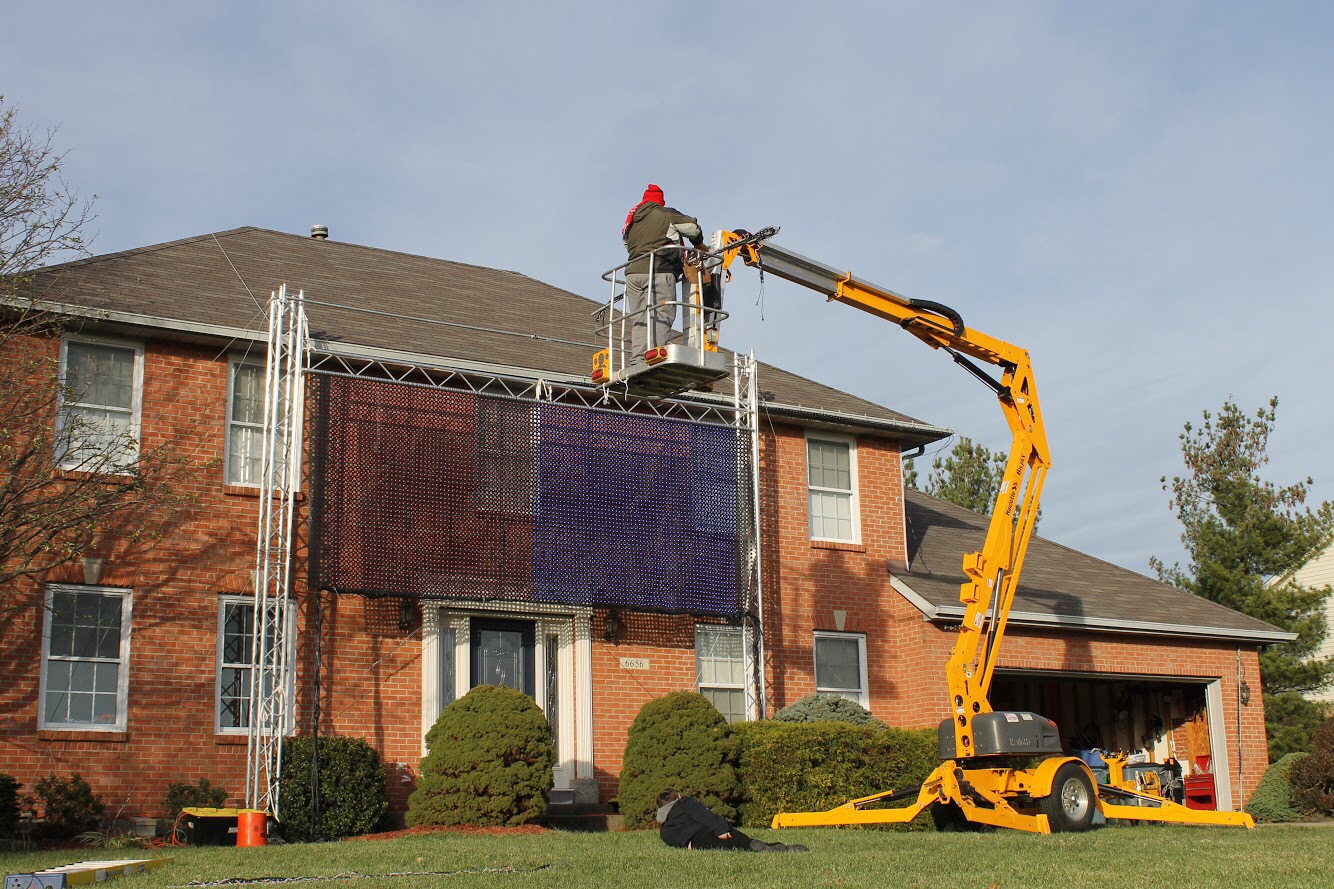 Greg Hormann uses a lift to install the grid in front of his house.

“[The lift] can haul up to 500 pounds, 35 feet in the air and move [the screen] around,” says Hormann. “We first build the frame and there’s two big steel poles on either side and we use the lift to hold it in place. We have steel cables going to the ground that keep it from moving and once we have [the cables] in place, we use the lift to pick up the whole big screen and place it on the house.”

The screen displays animations that correspond with the fourteen songs that play on the radio station, which the Hormanns purchased. Their radio station, 106.7, broadcasts up to a quarter of a mile from their house.

“The songs I actually sit down and program” says Hormann. “We have a laptop and [my wife] or I will just sit down and whatever song we’re going to do next year, we just program it for a few hours a day.”

Due to the complex nature of the show, the Hormanns work on the show year-round. They have been using a program called xLights for the past two years to organize, time and create all of the designs in the light show. The Hormanns say to program a 10 to 15 minute piece of a song can take over an hour.

Greg Hormann works in IT so he often works with computer programs and analyzing data. He believes that his background helps when working with the technical aspect of the show.

“I started by actually writing the software myself, [but] now we use more open source software,” says Hormann. “So it’s less hardcoding [then] it was back then.”

The show is so complex that Hormann takes the week of Thanksgiving off to help set up the display. While Hormann mostly focuses on the technical aspect of the show, the entire family tries to get involved.

“[My wife] Mary does most of the songs, at least half of them,” says Hormann. “She also does a lot of work for getting the screen up. [My daughter] Emily is responsible for the stars in the yard and figuring out where they go. [My son] Matt’s usually on quality control duty so he comes around and tells me what he likes, doesn’t like, he’s very good at pointing out the fact that something’s wrong.”

The Hormann’s physical equipment and displays come from China and are bought through a ‘Group-Buy’ in order to help the Hormanns save money. The Hormanns, along with others around the country that do lights displays, set up a small company with the sole purpose of buying Christmas lights.

“In January and February, everyone decides what they want, pull our money together and put in one huge order directly to China,” says Hormann. “And what they do is fill at least one semi container, sometimes two, and they ship those containers to the United States.”

The Hormann’s main concerns for the show are how it will affect their neighbors and the amount of traffic the lights show attracts. The Hormann’s have chosen not to submit their display to any TV stations or new outlets in an effort to keep the street traffic down, asking for their address to not be included in the story.

“I have noticed an increase in traffic lately,” says Ganote. “It seems the lights draw more people out each year, and while it can be difficult getting past the stop sign at night, I keep in mind how the lights make people feel joyful, and can look past the minor inconvenience it can cause.” 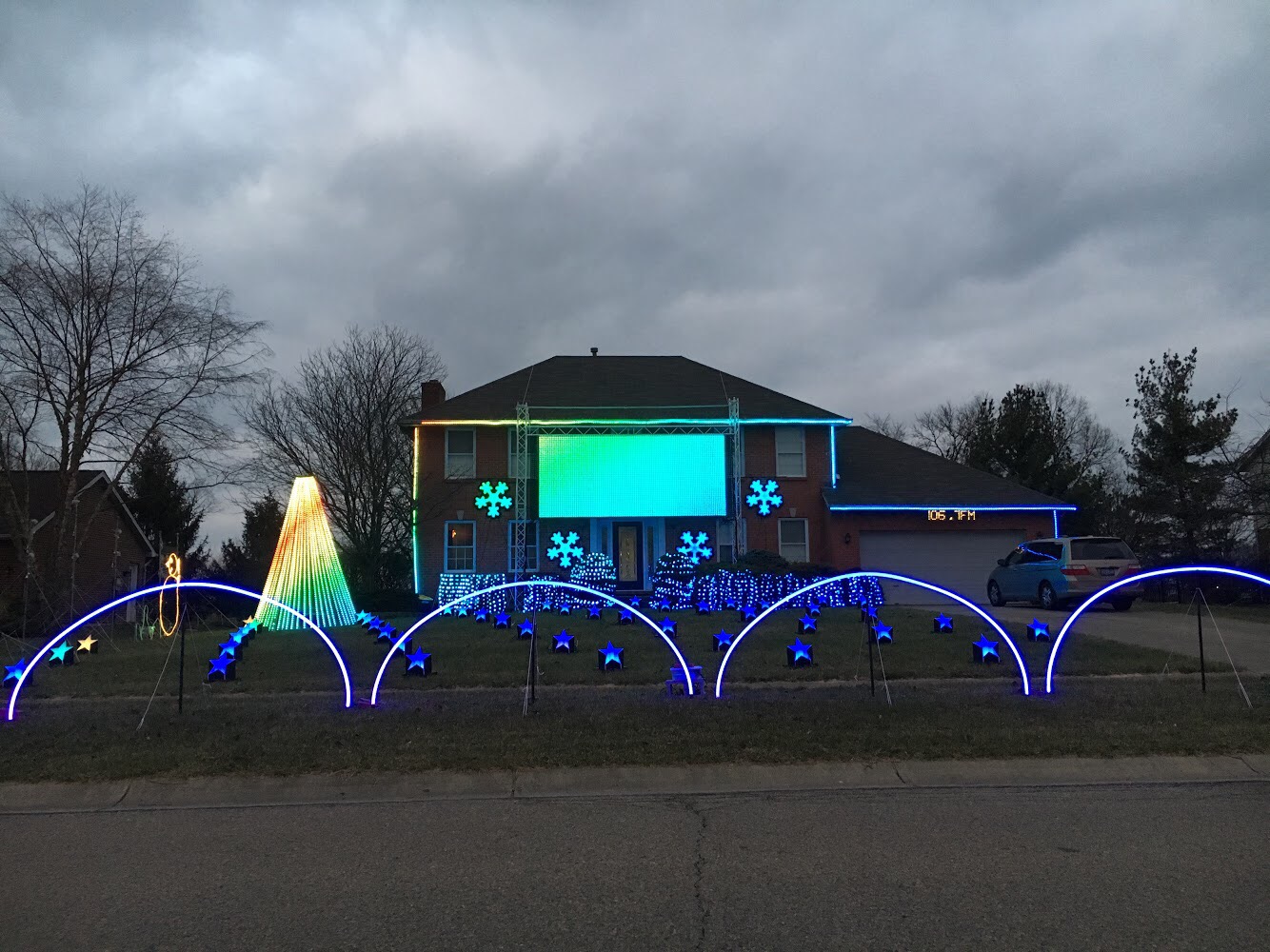 In addition to the traffic, another concern is the show’s brightness onto the yard and neighboring houses at night. Among the changes from last year was an effort to tone down the lights.

“The screen is actually 75 percent less bright than it was last year,” says Hormann. “The reason being, across the street [the lights were] lighting up their entire house and it was shining through their windows.”

Across the street from the Hormanns lives Jody Tenoever and the rest of her family. They have lived there since the first light show.

“Before they started doing the big show, Mary offered to buy us blackout curtains,” says Tenoever. “[The brightness] really hasn’t bothered us in the evening as much.”

The Hormann’s have had nursing homes and visitors drive as many as four hours to see their show. But the Hormann’s main goal for the display is to share some of their Christmas joy with their friends and neighbors.

“I always like that we’re always finding a way to put a smile on someone’s face for the day,” says Hormann.