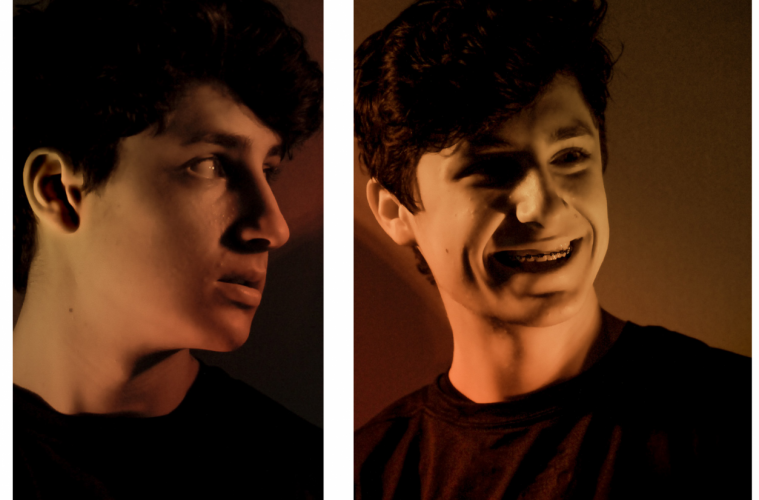 49% of East males surveyed believe it is socially acceptable to avoid talking about feelings.

For some, high school is a concrete oasis, overflowing with the empathy radiating from their peers. Around every corner is a smile and an outreached hand, waiting patiently to provide positivity and care.

For others, this sense of encouragement isn’t quite so obvious. It’s easy to drown in their thoughts— but still, it’s much preferable than sharing them with others. High school students can be brutal and unwilling to help, making it increasingly difficult for some to speak their mind without the fear of being judged.

“It’s hard to talk to people about [my feelings],” an anonymous East male student says. “I’ve tried talking about it with some people, and they just kind of ditch me, or roll their eyes and walk away. It’s been kind of traumatic.”

In a survey distributed to East by Spark, 49 percent of 102 male students answered that they feel it’s more socially acceptable to not talk about their mental health.

Although high school can be a time of social discomfort for some, this way of life can transfer over to adulthood as well. Due to the growing stereotype that men aren’t “manly” enough if they discuss their problems, it becomes difficult for most to feel heard, resulting in severe cases of unhealthy mentalities.

In 2017, men died by suicide 3.54 times more frequently than women, according to The American Foundation for Suicide Prevention. Depending on personal life and environmental factors, the degrees of suicidal thoughts and depression can vary from man to man, making it difficult for some to communicate about their emotions.

Miami University masculinities professor Kyle Ashlee has studied the socialization of men, and how they are taught to fit within their gender stereotypes. He comments on the cultural conditions men are brought into, and how it affects their ability to express themselves.

“Men, when it comes to challenges and problems, very rarely look to other people for help and assistance,” Ashlee says. “We do pretty unhealthy things to cope and try to solve those problems ourselves. Whether that’s through violence, aggression, alcohol, and other substances, sexual dominance—whatever that might be.” 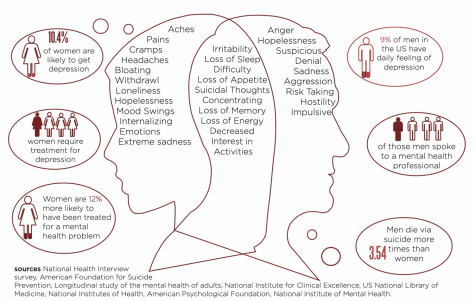 Statistically, women tend to be diagnosed with anxiety or depression more often than men, according to the American Psychological Association. Men, however, are more likely to struggle with substance abuse and antisocial disorders above everything.

As the United States (US) National Library of Medicine states, “men suffer from depression as women do, yet how that depression is expressed can differ for men. Particularly in the early stages, it often manifests as irritability, anger, hostility, aggressiveness, risk-taking, and escaping behavior.”

These actions are typically labeled as “toxic masculinity,” a term that has become controversial more recently. The term is defined by The Good Men Project as “a narrow and repressive description of manhood; the cultural idea of manliness, where strength is everything while emotions are a weakness.”

“I don’t use the term ‘toxic masculinity’ anymore, because, essentially, you’re telling somebody that they’re toxic,” Miami University psychology and individualized studies major Katie Freeman says. “It forms in a society where we’re raising people to be strong and not do anything feminine. When you’re avoiding all things that are feminine, you’re sort of trapped with that power—and you can never show weakness because otherwise, you lose it.”

Traditionally, masculinity is based on a man’s ability to “‘tough it out” on your own,’ something that is drilled into the male psyche from birth, as Unity Behavioral Health rehabilitation center states.

Generally, men tend to be more affected by indicators of success, in terms of where they place their worth—things like career achievement, their paycheck, and if they provide enough for their families.

If these goals, along with other personal objectives, are unmet, that burying of emotions may manifest into toxic behaviors. Impulsive and aggressive actions, although common, are not the limit; diagnosable mental illnesses can quickly be brought to the table, according to Unity Behavioral Health.

Whether or not this personal information is shared, in order to release built up emotions to receive helpful advice, is a choice all face. One of the East and West school psychologists, Bethany Noble, recognizes the difficulty in this.

“It’s difficult because some people want to disclose and some people don’t,” Noble says. “You can’t just bring it out. Iit’s a cultural, generational kind of change, where people are feeling more like they’re going to be accepted, even if they have mental health [issues].”

Without the will to seek help—or the availability of assistance—suppression, failure to recognize symptoms, or minimizing of signs, can arise. Unity Behavioral Health concludes that this results in an epidemic of undiagnosed mental health issues, especially in men compared to women.

According to the US National Library of Medicine, this wave of under-diagnosis, along with spiking rates of suicide and poor engagement with mental health services, highlights the complexity of the issue. Multiple factors are at play, and must be managed properly in order to help men overcome the burden of mental health issues.

“Generally speaking, men don’t like to talk about anything, especially personal things that might be challenging or difficult,” Ashlee says. “They are aching for an opportunity to talk about themselves where they’ll feel safe, not like they’re less of a man or inferior somehow. I always try to tell people to allow men to be human, to be their authentic selves.”

For many, this opportunity can come from professional help through individual or group therapy, along with medications to help relieve the symptoms of mental illnesses. HelpGuide, an information center for health and wellness, notes that if this isn’t an option for the individual, one can always seek support in their peers or in themselves, as HelpGuide states.

“I’ve tried talking about [my feelings] with some people, and they just kind of ditch me, or roll their eyes and walk away. It’s been kind of traumatic.” —Anonymous East male student

East, for example, hosts a chapter of the Hope Squad in order to spread mental health awareness and provide help. The organization is a suicide prevention program that also tries to “reinforce the ripple effect of kindness and positivity,” according to East English teacher and Hope Squad Lead Advisor Erin Schneider.

“The very fact that Hope Squad exists is a step in the right direction,” Schneider says. We have a long way to go, because the misconceptions about mental illness still exist. We have to make a pointed effort, especially with our male students, to let them know it’s okay not to be okay, and that it’s okay to share those feelings and get help.”

Hope Squad, along with the availability of guidance counselors and psychologists, continually provides assistance to those with mental health concerns at East. Constantly improving education on the subject is key, as Schneider says, and these groups are doing everything in their power to contribute.

The same can be said for society as a whole, according to Ashlee. Small changes are being made to allow individuals to be heard, encouraging the entire demographic of men to connect more with their own sense of vulnerability.

“It’s very hard to change societal pressures and how society thinks. It will take a lot of time,” the anonymous East student says. “It’s a start; what we’re doing is right. We’re taking the right steps, but it’s not going to happen overnight. It’s a process.”