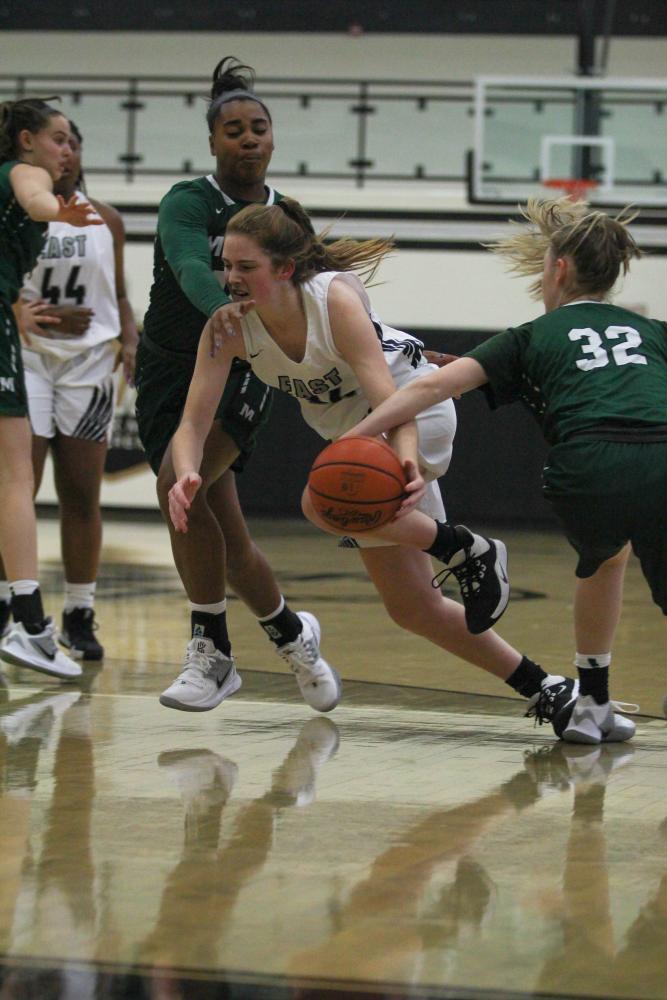 story and photography by Nick Hetterich

After going 9-15 last season, East head coach Dan Wallace looks to turn the program around in his second season as the girls varsity coach. Struggling in the Greater Miami Conference (GMC) last year, the team looks to be more competitive and put up a fight against tough competition.

The team has started out 3-0, with all of their wins coming against non-conference opponents, and they are looking to run the table in their conference schedule this year. This is the first time since the 2012 season that the girls have started the season on a three game win streak.

The Hawks have a lot of new faces this year, with freshman Madison French, along with four additional sophomores: Sarah Sewak, Olivia Hines, Liz Tenoever, and Ashley Fohl. French is already averaging eight points per game, and has helped provide a spark for the relatively young team. 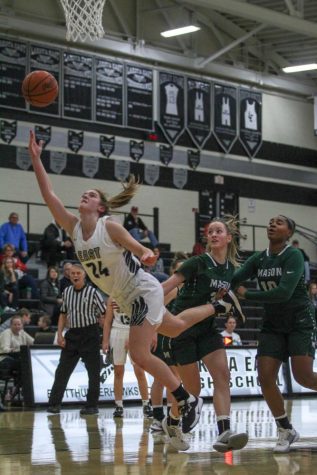 Guard Madison French dives for two of her 11 points in a 54-33 loss to Mason.

Coach Wallace took a different approach to conditioning throughout the offseason, and mentioned how big of an impact he thinks it will have on the team this season.

“I made them uncomfortable this offseason,” Wallace says. “I made them work out in the sand in the middle of summer in 100 degree heat and made them really get after it harder in the weight room. So, you know, a lot of it is just when changing the culture of work expectations and the competitive level.”

The Hawks will face a very competitive GMC schedule, including rivals Lakota West, Mason, and the up and coming Princeton Vikings. All of these teams had great seasons last year, including district rival Lakota West going 22-4 overall and 14-1 in conference play.

“We’re expecting to surprise a lot of people, especially in the GMC this year, specifically with the talent we have from the underclassmen,” junior forward Maddy Bley says. “We’re playing a lot differently this year and we look like a whole new team from last year.”

Not only do they have a strong group of underclassmen, but they also have five returning seniors. This should give them some good leadership to help develop the younger players.

This girls team is looking to make a real push into the GMC and state tournament, and they know that they will have to bring their A game each and every night.

“I expect to get more playing time this year with a big leadership role and get a lot more assists,” senior guard Camryn Eddy says. “I will also try to keep my assist to turnover ratio down as I am trying to become a much better distributor this year.”