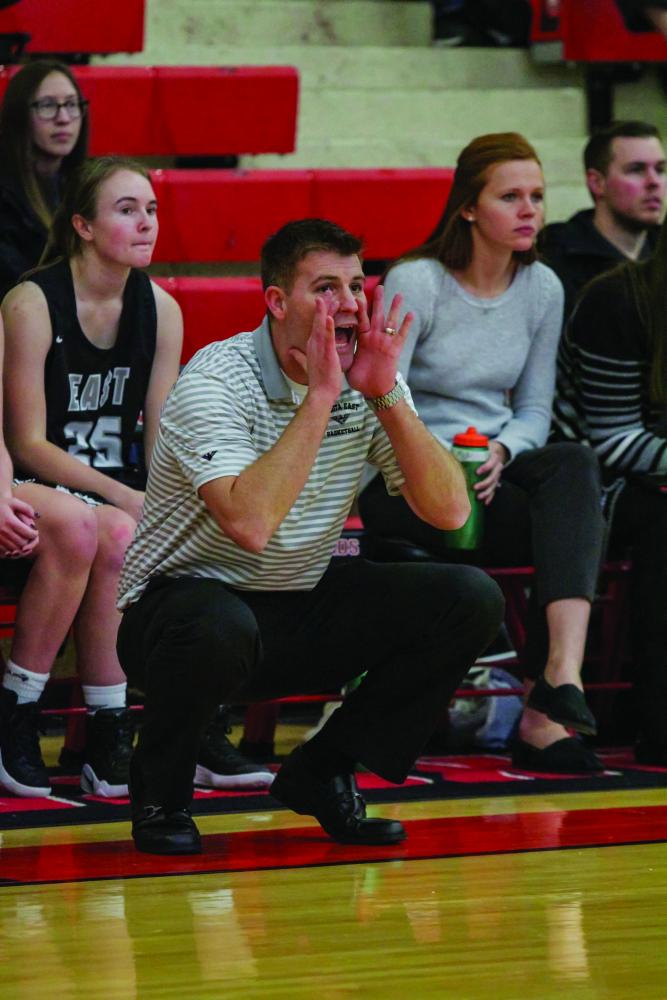 East girls basketball coach Dan Wallace shouts out words of encouragement to his players against West.

As the final seconds tick off the clock at Oak Hills High School on a Wednesday in early December, members of the East varsity girls basketball team are all smiles. After another hard fought battle, they have emerged victorious for the fifth time in their first seven games and are peaking at the right time heading into their upcoming matchup with West.

A year ago, this situation would have seemed like a dream to the Thunderhawks that were suffering through yet another losing season. However, the girls have been able to make this dream a reality during their final season with the help of first-year head coach Dan Wallace. After coming to East from McAuley High School where he had a record of 99-26 over five seasons, Wallace has led the team to their best start since the 2015-16 season.

“East has a lot of unique qualities that make it a desirable place for me to look to build a basketball program,” Wallace says. “Success in the classroom, community, and athletic department have made East one of the premier school districts in Ohio, and has proven over the past few years to be a place that looks to be going in a terrific direction.”

The East girls basketball team is heading in a better direction under Wallace after defeating Greater Miami Conference (GMC) rival Middletown 48-43. Middletown head coach Kevin Aldridge, who defeated East 53-49 last season, noticed a difference in the way the Thunderhawks competed in the matchup this year.

“They seemed to play with more passion,” Aldridge says. “The girls appeared to maintain their confidence and focus in the late stages of the game and made the plays necessary to come out victorious.”

With the team winning more games than they have been used to over the past few seasons, East senior forward Jessica Motley pointed out Wallace’s positive attitude and constant encouragement as factors in the team’s success.

“I believe the success we have had this season stems from having a positive coach who applauds us when credit is due, but also remains stern in order to hold the team accountable,”  Motley says. “Our coach has helped place confidence back in our game and encouraged us in believing we are good enough to accomplish great things.”

East senior Jordan Stanley is also thankful for Wallace’s positivity that has helped improve her confidence and given the senior class a chance to go out on a high note after this season.

“Coach Wallace has made me a better player and person. He’s made us think about the game in ways that we would have never imagined and held us all accountable,” Stanley says. The best part of playing for him is he is always encouraging and positive. He would never let you play without confidence or effort. He taught us that once you step inside the four black lines, you have to give it everything you have and can’t have any regrets.”

Motley, who has averaged 5.6 points and 6.1 rebounds per game this season, is part of a group of seniors that have been through a multitude of change and uncertainty during their time as Thunderhawks. Among these upperclassmen leaders is East senior Lily Rupp, who credits the closeness and togetherness of the team in helping fight through the adversity they have faced.

“Going through coaching changes has been difficult but it’s also helped our team become really strong and improve our chemistry,” Rupp says. “We’re really like a family and we have all been through the same things so we can relate to each other.”

While Motley and the entire varsity roster will be better off this season and in a better position to win, the true impact left on them by the adversity will be the lessons they have learned about how to handle real-life situations once their basketball careers come to an end.

“Walking away from this program will leave me with so many valuable life lessons. The changes my teammates and I have faced over the past four years have presented us with the opportunity to grow as people,” Motley says. “In life, you don’t get to pick the cards you are dealt, you simply have to play with what you are given. You have to make the best out of the situations you are faced with and being a part of this team has taught me how to do that.

Stanley recognizes the difficulty that has come with playing for so many different coaches and having to learn an entirely new system while struggling to win games. However, she has also been able to keep a positive attitude and learn from the hardships while still enjoying the game she loves.

“Every year I had to adapt to new coaching techniques and styles. I have learned to listen and believe in each coach and what they had to say,” Stanley says. “Even though we have lost a lot of games, as long as you improve and have fun, that’s all that matters.”

With the team off to a very respectable start this season, East Athletic Director Richard Bryant, who hired Wallace in an attempt to reverse the recent losing trend, is happy for the seniors who have had to experience hardships over the past few years.

I’m proud of all of them, I love all of them, and I thank them for their patience and their hard work as we’ve moved through some difficult times in east girls basketball.

“I think being able to win means the world to the girls and their families. Losing is not fun, there’s no way to cut that up,” Bryant says. “Success is something that is tremendous for the program. The girls have put in a lot of time and effort to improve themselves and the addition of coach Wallace and his entire staff has pushed us in the right direction this season.”

After the team finished with a record of 4-12 in the GMC and 5-19 overall last season, Bryant knew it was time for a change in leadership. After Mercy and McAuley high schools combined into one school, former McAuley head coach Wallace was the perfect fit for the job at East.

“I’ve known coach Wallace for over a decade,” Bryant says. “He has built programs from bottom up and obtained success at the highest level. His organization, communication, and knowledge of the game make him an excellent high school basketball coach.”

The decision to hire Wallace already looks to be a great one for the program after just a few short months. However, it hasn’t been easy for the team to achieve the success that they have so far this season, and they know they still have a long way to go if they want to get to the top of the league.

“The biggest challenge in regards to turning this team around has just been patience. It takes time to build the work ethic, culture, growth mindset, and attention to detail that is necessary to be one of the top programs in the area,” Wallace says. “Many people in society today want and expect immediate results, but we have been focusing on getting the foundation built for long term continued success, which takes more time than people realize.”

Even though they still have a long way to go, the new-look Thunderhawks have already made an impression on the rest of the conference, and Middletown’s coach Kevin Aldridge believes Wallace is the right man to try to keep building the program.

“I know that [Wallace] has been around the game a long time and has experienced success at his former school,” Aldridge says. “I believe that he will do his best to build the program into what he has envisioned and tried to do at his past coaching assignments.”

The modest degree of success that Wallace has brought this season is a positive sign for a program that has been going through a very difficult stretch, with sustained success being very difficult to obtain. In fact, Nikki Drew (55-40) and Jill Phillips (34-17) are the only coaches to finish with a winning record since the building opened in 1997.

Bryant, who has witnessed this group of girls go through so many ups and downs over the past four years, credits them for persevering through the difficulties, growing as teammates and individuals, and making progress on the court this season.

“The group that most people don’t think about is that senior class. Having several coaches, several directions, several layers of expectation is very difficult on student-athletes,” Bryant says. “I’m proud of all of them, I love all of them, and I thank them for their patience and their hard work as we’ve moved through some difficult times in east girls basketball.”

While the varsity team isn’t exactly lighting up the win column this season, they have clearly improved from last year and are trending in a positive direction, something that Wallace is excited about moving towards the GMC tournament.

“We have made tremendous strides with our understanding of the game and what winning behaviors are and how hard you have to work to get better,” Wallace says. “This program is still just scratching the surface of how good they can be by the end of the season.”

The 2018-19 team still has goals that they can accomplish in the final weeks of their season, but Wallace is only just getting started after this season ends. With a new coach who is clearly excited about leading the program, a group of players that have the patience and commitment necessary to win, and a community who supports the team, the days of losing and uncertainty seem to be a thing of the past for the Thunderhawks

“Going into this season, we wanted to help find success and begin building the expectation of the program at the lower levels. The varsity team has already won more games than they did last year and both of our junior varsity (JV) teams are playing at a high level with tremendous records,” Wallace says. “The future is bright for East girls basketball and, with the support of the school, community, parents, and alumni, I have no doubt that this program will continue to grow.”