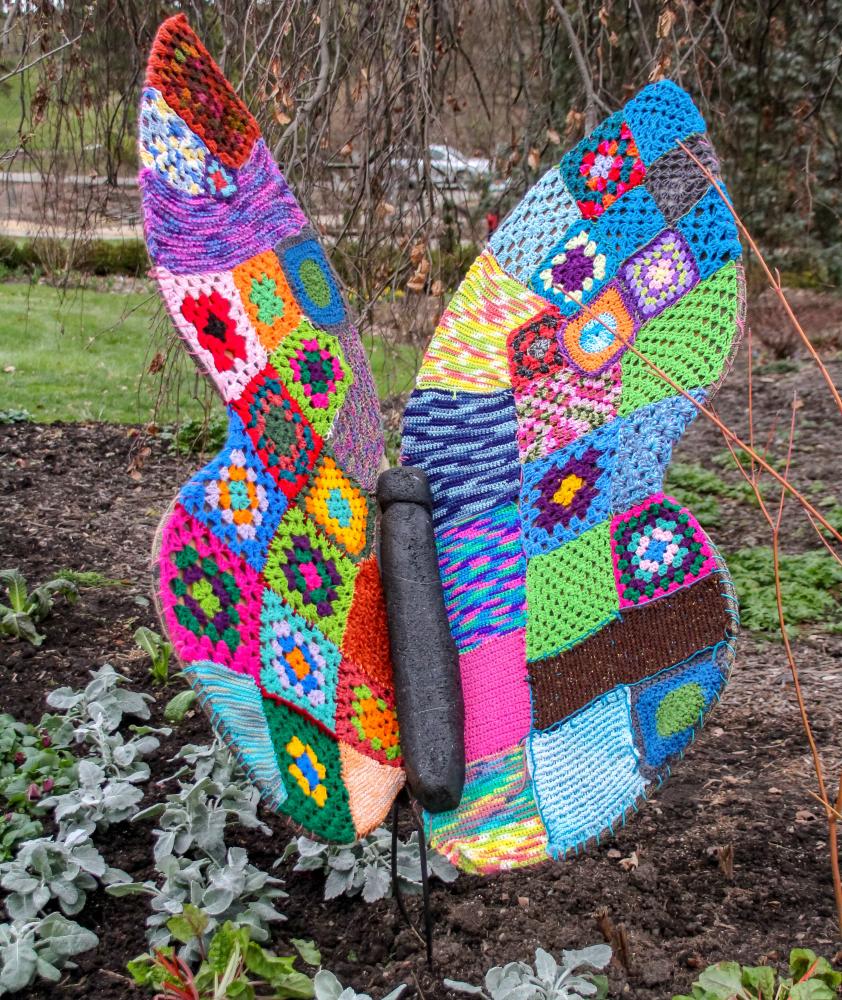 story and photography by anna mullins

A cannon decorated in an array of patterns in Washington Park shot flowers instead of cannonballs, the parking meters were transformed into vibrant flowers, and trees looked as if they were straight out of Dr. Seuss. These fantastical dreams were made possible with yarn bombing.

Yarn bombing is an art that utilizes knitted or crocheted yarn pieces to cover public objects transforming them into something completely different. The yarn bombing movement started in Houston with fiber artist Magda Sayeg knitting a cozy for the door handle of her shop.

East art and photography teacher Karen Saunders is one of the original 10 bombshells. The bombshells are a group of women in Cincinnati who enjoy art and choose to express themselves using yarn bombing. Saunders, whose grandmother was an extremely skilled knitter, has worked on big art projects before and learned to knit as a child. When Saunders was approached about doing yarn bombing she said yes.

“My favorite project was when we did all of Central Parkway because it was so big and massive,” Saunders says. “I got to [yarn bomb] a bus and I had a whole block to do. I also did a Schwinn bike for two people. We totally covered the bike and it hung inside of Coffee Emporium for a couple of years afterward.”

More than 150 people arrived in Central Parkway at 6 p.m. to give their own creative flair to the park. A team of 10 bombshells, and their teams of sidekicks dressed in all black with blonde wigs and sunglasses brought out their knitting needles and their pre-knit installations to express themselves creatively. All the groups met each other for the first time, and they started putting their work together.

Harrison High School art teacher Pam Kravetz says everything was super organized because a lot of them are teachers.

“People came and got their knitting needles and we started installing,” Kravetz says. “It was just completely magical. There were questions like ‘What if somebody steals it?’ Okay, well they wanted it more than we did. It was a really good lesson for all of us as far as making something, letting it go, and working collaboratively with such a large group of people.”

Kravetz, who goes by the moniker, Pinky Shears,  initially approached Saunders eight years ago to join her team. Kravetz was the “mastermind” behind the Bombshells, which is a team of women who create works of art out of yarn and yarn bomb places around Cincinnati.

“I got my name Pinky Shears from one of my students,” Kravetz said. “She had one of those sweatpants that say PINK on it from Victoria Secret and there was a pair of scissors on the table, and I’m like, ‘Pinky Shears, I think that is what I’ll be.’”

Kravetz started the group by asking some of her close friends in the artistic community if they would be interested in doing Yarn bombing. She came up with her idea of what to yarn bomb when talking to Artworks CEO Tamara Harkavy.

The bombshells take turns being in charge of and designing projects. For the first year of their existence, Kravetz was the lead for the projects but as they got to know each other and figured out each other’s skills, they began to branch out.

Since then the group has done several other projects. The most recent project was done at The Krohn Conservatory Butterfly Show where they created yarn butterflies and covered trees to make it look like a Madagascar jungle.

East has its very own knitting club. East senior Elizabeth Pinder started the knitting club last year to teach her friends how to knit. She now serves as co-president of the club with senior Hannah Nguyen.

“We knit a lot of squares,” Pinder said. “There’s an organization, Warm Up America, that we are going to donate them to, and they connect them to make blankets for people.”

Pinder started knitting after her sixth-grade social studies teacher taught her. She continued knitting because it is a stress reliever for her, and she enjoys the social aspect of the group.

One of the aspects of yarn bombing is the freedom to express oneself creatively. One of the passion projects taken on by the yarn bombers involved transforming elephant statues into characters from the Disney movie Dumbo.

“One of the bombshells just one day decided [to yarn bomb], Pachyderm—the large elephants that used to be at the old natural history museum and now they are on the side of the road,” Kravetz says. “She said ‘I just want to make them look like Dumbo and the mom.’ She contacted the museum center and [they said we could do it] so we did.”

Knitting and crocheting are things that can be learned from friends and family and is not an activity bound by age. The yarn bombers themselves range from the ages of 25 to 70. Both Saunders and Kravetz would agree with Pinder on the social aspect surrounding knitting. Their favorite part about yarn bombing is the camaraderie.