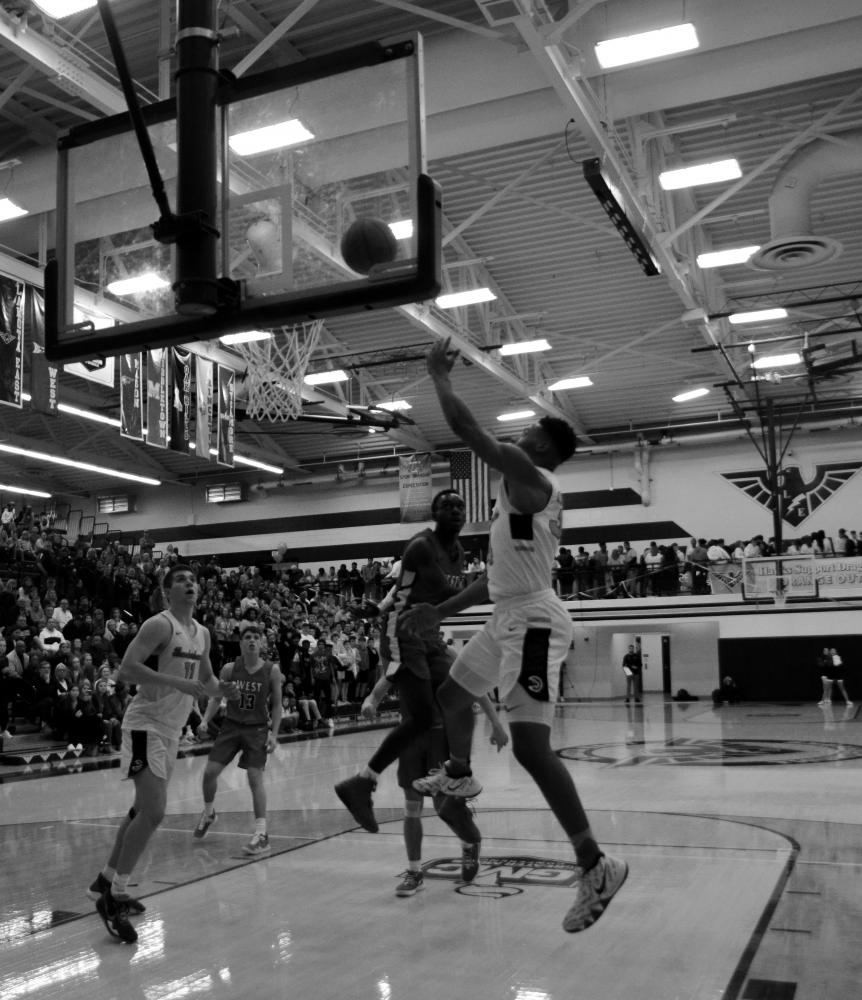 And he did, as three Hamilton jerseys flew at him.

This is what defines East junior guard Nate Johnson- a perfect laser-beam pass underneath to 6’7 Alex Mangold for the game-winning layup.

He’ll do whatever he needs to for the team to win, whether it be scoring or passing.

In the season opener against Taft on Nov. 29 at the Ohio Valley Hoops Classic in Mason, East fell behind in the first quarter 19-11. But then something changed. Johnson became more aggressive, slashing to the rim with lightning quickness to score 14 points in the second quarter alone. By halftime, East was up 37-28, and Johnson didn’t stop there. He finished the game with 28 points in a 75-65 victory.

The season opener was just the beginning of what’s been a dominant season for Johnson so far. He followed up his 28 point game by dropping 32 points against one of the GMC favorites Princeton.  Through the teams first 11 games, Johnson is averaging 18.4 points per game.

“Last year I wouldn’t have shot out of the paint,” Johnson says. “Now it’s one of the main points of my game.”

To go along with his lightning quickness, Johnson has the ability to stop on a dime and sink a mid-range pull up jumper. Head coach Clint Adkins says that this aspect of his game is something that wasn’t there last year.

“He’s really worked on his one dribble pull up his to dribble pull up, so he shoots the ball really well off the bounce,” Adkins says. “I would say that’s probably the biggest area of improvement in his game.”

According to Adkins, improving shooting is something that takes a lot of time.

“You need a lot of hard reps in order to improve,” Adkins says. “You don’t just wake up one day [and] you’re a better shooter. [Johnson has] definitely put in a lot of good work.”

Johnson’s teammates also have a lot of confidence in his abilities. Sophomore forward Charlie Kenrich says that his driving ability is what makes him so tough to guard.

“He really can get to the rim at will,” Kenrich says. “When he is in full attack mode, nobody can stop him.”

However scoring is far from Johnson’s only strength on the court. With the ability to garner attention from multiple defenders at once when driving to the basket or on the perimeter, teammates often become open.

This ability was on full display during the final seconds of the game against Hamilton. With 11 seconds left on the clock and Johnson with the ball at the top of the key, senior Alex Mangold set a screen for him. Both Mangold and Johnson’s defender went to Johnson without hesitation Johnson threw the ball inside to a streaking Mangold, who laid the ball up and in for the win.

“He’s a tremendous passer who makes great decisions,” Adkins says. “He can pass the ball with his right hand or his left hand.”

Johnson leads the team in assists and is fourth in the GMC with 3.7 assists, not to mention his ability to disrupt the game on the defensive side of the ball, as he leads the entire conference in steals per game with 2.5.

One may expect a player who leads the team in points, assists, and steals to be arrogant. However, it is quite the contrary for Johnson, according to Adkins.

“You might expect him to not be a good teammate but he’s the exact opposite,” Adkins says. “He’s a great kid and I think because of that, his teammates really rally around him.”

Kenrich also backs this up. He says that every time someone asks him how many points he has, he’ll always say less than what he actually had.

“Nate is one of the most humble people that I’ve ever been around,” Kenrich says. “When you ask him how many points he’s going to score, he always says something like two.”

Johnson’s skillset has caught the attention of multiple division one schools. He currently has scholarship offers from Miami, Ohio University, and Kent State, while also receiving interest from Cincinnati, Xavier, Dayton, and Ohio State.

“I’m going to try to go as far as I can with basketball,” Johnson says. “The ultimate goal is the NBA.”