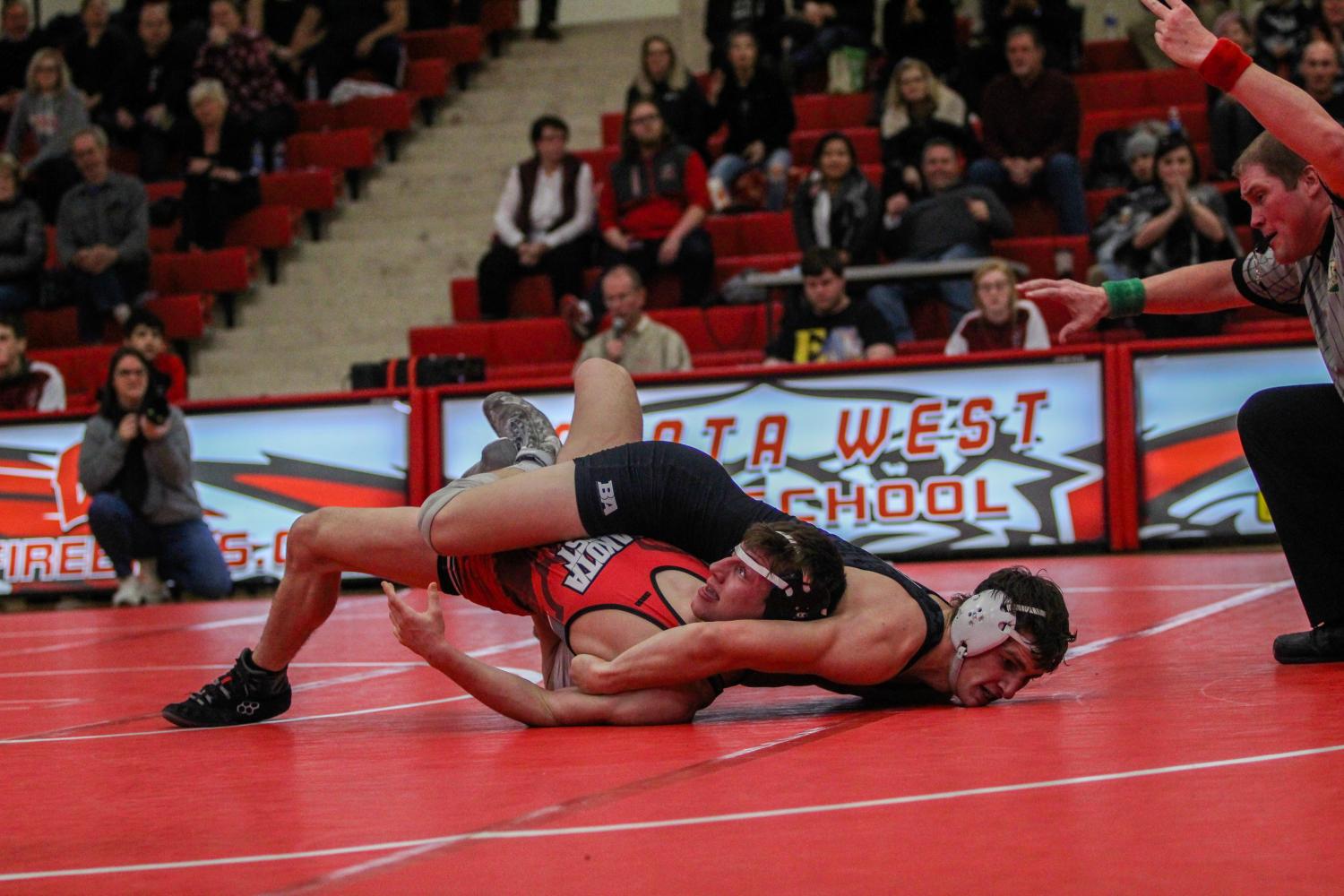 The Boys Wrestling team gathers inside the East wrestling room to prepare for their Monday practice. However, this is not just any routine Monday practice. It’s sectionals week, and the intensity and urgency that echoes through the room of wrestlers is what many would consider to be a winning atmosphere.

With a huge week of practice ahead, the Hawks were looking to maximize every opportunity in preparation for their upcoming sectional tournament. Sure enough, they capitalized on this opportunity in a dominating fashion.

The Hawks had just come off a second place finish at the GMC championship meet, which marks the program’s highest conference finish since the 2002-2003 season. It is also an improvement from their third place finish last season. The following Saturday, the Hawks marched over to Middletown and blew their competition off the mat with a team total of 232 points, over 60 points more than second-place finisher Colerain.

Since East’s new head coach Chad Craft took over the program at the start of the 2018 season, the program has soared to the top of the GMC ranks and has become a strong competitor among some of the best wrestling programs in Southwest Ohio. With a strong emphasis on togetherness and teamwork implemented by Coach Craft, it is becoming very evident that the key to the program’s success has been each individual wrestler coming together and scoring points as a team. Craft also emphasized the great impact of this year’s senior class and the mark they will leave on the program.

“I have never had this many dedicated and hard working seniors on one team,” Craft says. “They have become great leaders for the younger wrestlers and pushed themselves to meet their personal and team goals.”

Many of the wrestlers have also attributed this quick turnaround to the excellent coaching staff brought in by Craft. Among these athletes is freshman Andrew Gibson, who has made a name for himself in his first year with the program after making the varsity roster and finishing fourth place in the 106 lb. weight class at the OHSAA sectional tournament, qualifying him for the district tournament. Even in just one year at the high school level, he has realized the great success that the program has achieved, and he knows that they are just getting started.

“I feel like our team chemistry and coaching were absolutely amazing this year, and that is really what has allowed us to achieve so much,” Gibson says. “Not only that, but the coaching staff has been doing a great job of developing our younger talent, and that makes the future even brighter for this program.”

Although Gibson is a huge contributor to the talent of the underclassmen, this team is also led by a large group of juniors and seniors who have several years of experience within the program. Junior Max Boaz, who took home the GMC title and also placed second at the OHSAA sectional tournament in the 132-lb. weight class, also mentioned the excellent chemistry that the team has possessed all year.

“This particular team is special to me personally because of the close bond that I have with so many of my teammates,” Boaz says. “For some of us, we’ve been wrestling together since kindergarten, and for us to have such great team chemistry and to be surrounded by such an excellent coaching staff, it makes winning much easier.”

Adding on to the immense talent of the upperclassmen group is senior captain Alex Epstein (138), who finished third in his weight class at the OHSAA District tournament on March 7 and will advance to the Division I state wrestling championships on March 14. Epstein, who carries an impressive 39-6 record into the state championship meet, has gone through two different coaches throughout his career at East and knows exactly what it takes to be a part of a successful team.

“I think what makes this team so successful is the fact that they want to win for the team and not just themselves,” Epstein says. “A lot of wrestlers are in the sport to fight for themselves and just get by, but that is simply not the case with this team. These guys will do whatever it takes to win.”

Similar to Gibson and Boaz, Epstein also took note of the unique bond that he saw between him and his teammates throughout this season.

“There is so much that I am going to miss about this team,” Epstein says. “From the excellent coaching staff, to my best friends that I have wrestled with for almost my entire life, the East Wrestling program has been like a second family to me and I’m glad I got to experience this amazing team chemistry.”

For this program, it’s fairly obvious that their talent is through the roof. But what truly separates them into the category of elite teams in Southwest Ohio and has given them so much team success is their chemistry with each other. When each individual wrestler is out there wrestling for their team, it is easy to understand why the program has seen such a huge turnaround in the past two or three seasons.

This year’s team will certainly be missed, especially this senior class, but with the new coaching staff and such a large group of varsity wrestlers returning next year, it is safe to say that the Hawks are back on the rise, and the future looks to be even more promising.

“This is by far the toughest team, both physically and mentally, that I have ever coached,” Craft says. “This season has been a lot of fun and I’m glad that I got to see these guys grow as wrestlers and as young men.”