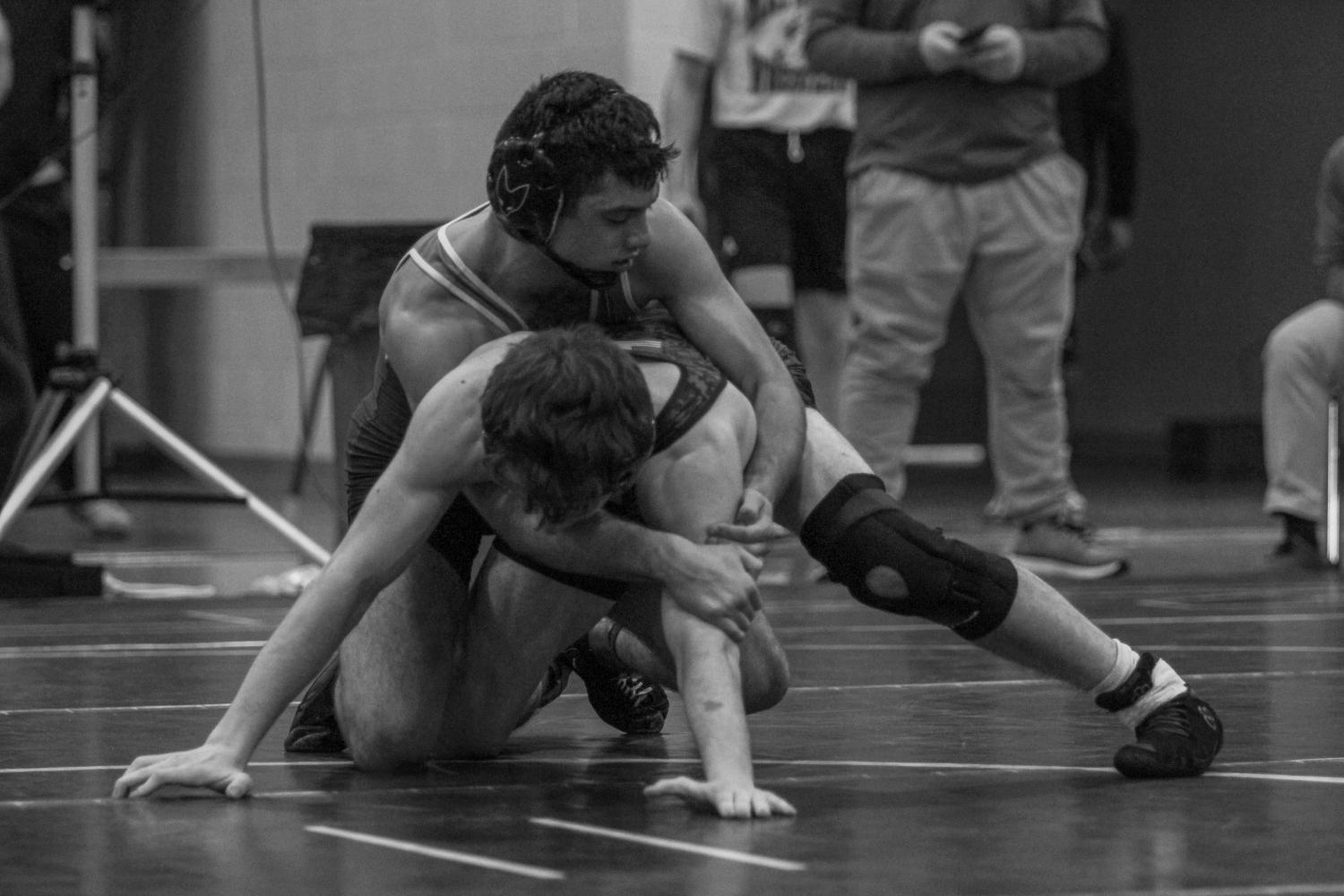 Wrestler Max Pennix prevents his opponent from escaping in the Referee's Position.

Put a Pin In It

The East wrestling team walks out onto the mats of Mason High School as one of the ten schools at the 2020 Mason Wrestling Invitational. Around 200 sit in the audience to watch one of the more exclusive tournaments in the area. The team holds their heads high, anticipating a ferocious day of wrestling and reflecting on their increasing success in their past tournaments.

Even with their immense preparation and drive, the team placed tenth; much lower than they anticipated. However, considering the fact that six out of their thirteen starting varsity wrestlers were out due to injuries, a sixth place finish isn’t as bad as it appears on paper.

The wrestlers injured include Tavier Lugo-Flowers (195 lb.), Alex Epstein (145 lb.), Aaron Sharpe (285 lb.), Vince Kornau (160 lb.), Andrew Brauer (138 lb.), and Gabe Pascual (195 lb.). Of these wrestlers, Lugo-Flowers, Epstein, and Sharpe were all state qualifiers last year, and Lugo-Flowers is ranked in the top 50 wrestlers nationally. With so many of the Hawk’s best athletes being out, the burden was high that the remaining wrestlers had to carry.

Varsity wrestler and East junior Max Pennix seems indifferent to this pressure, however. Pennix placed sixth wrestling in the 152 lb. weight class, and believes that the team has some things to work on, especially considering the injury circumstances.

“It’s definitely unfortunate, but in perspective, we had a lot of our best guys out, and we were facing some of the best teams in the area; teams that far exceeded the skill of many teams we’d faced before,” Pennix says. “We’ve had great placements in the past, especially at the Coaches’ Classic, so I know we’ve got the skill. We had one bad tourney, but my advice to the team is for us to get better, keep our head up, and keep pushing to be better than the day before.”

Just weeks earlier, the team wrestled at Harrison High School as one of the 47 schools at the 2019 Southwest Ohio Coaches’ Classic tournament. The seats were almost sold out – around 1000 in attendance – at the biggest competition in the Greater Cincinnati area. With the holiday season approaching fast, the Hawks were hoping to get an early Christmas present with a high placement, which they did receive with an eighth place finish overall out of the 47.

The difference between this tournament and the Mason Invitational was the fact that many of the players currently injured were still healthy, including Epstein, Kornau, and Lugo-Flowers. Their performance at either tournament has reflected the health of their team.

East junior and varsity wrestler Eli Willis has wrestled with East throughout his entire high school career and is going 8-3 this season, wrestling in the 170 lb. weight class. Willis believes that the Coaches’ Classic tournament finish – in retrospect –  has been a big help to the team’s mindset looking towards the GMC Finals.

“That [Coaches’ Classic] tournament really showed how much we needed to work on,” Willis says. “We may have placed 8th, but that did not satisfy our desire to win, our drive to succeed. I know we have so much more potential and I think this just put us in a good place for GMCs now that we know what to work on.”

This high finish in the annual Coaches’ Classic tournament also added to the Hawks’ undefeated 11-0 duals record during their standard season. East began the year winning their first two matches on opening night against Anderson and Little Miami, scoring 66-18 and 52-12 respectively. The team later went on to win five more matches at Tinora High School on Dec. 14, and then to place seventh out of 47 teams at Perrysburg High School on Jan. 10 and 11.

East wrestling is once again led by a large group of upperclassmen, but this year, the team of 48 wrestlers also includes 15 freshman. However, with a majority of the upperclassmen out due to injury, some of the underclassmen have been forced to step up and fill the empty shoes of the seniors. According to Wrestling Head Coach Chad Craft, this year’s freshmen have big potential, and he hopes the younger guys can pull their weight until the return of their injured teammates.

“Our focus as a staff, as a team, is to teach these young men cooperation, and so I expect big things from our seniors to guide the freshmen as leaders,” says Craft, who became East’s wrestling coach in early 2018. Since then, the team has shown to have great chemistry with their new coach, who had led them to the GMC semifinals in the 2018-2019 season.

Mason High School first-year varsity wrestling Head Coach Nicholas Maffey commented on behalf of the team as both the Hawks and the Comets head into GMC season.

“Judging from what I’ve seen, we’ve got two great teams that are set to give it their all and are both filled with fiery determination,” Maffey says. “I wish the best of luck to the Hawks and to our Comets as well.”

Looking into the GMC postseason matchups, the Hawks will wrestle three different conference opponents in duals. Those opponents are Lakota West, Mason, and Fairfield. The only confirmed wrestler returning for the dual against rival West on Jan. 22 is senior Aaron Sharpe, who wrestles in the 285 lb. weight class and finished fourth in his weight class at the Beavercreek Invitational on Jan. 4. According to Craft, the team is preparing harder than ever in anticipation for the postseason. Pennix, as well as many other wrestlers, are proof of this statement.

“I know we can do better than what we’ve been doing, but our best lineup is moving into place very soon, and right in time for duals,” Pennix says. “We will be at our best when our opponents come knocking, and we won’t let our teammates down.”