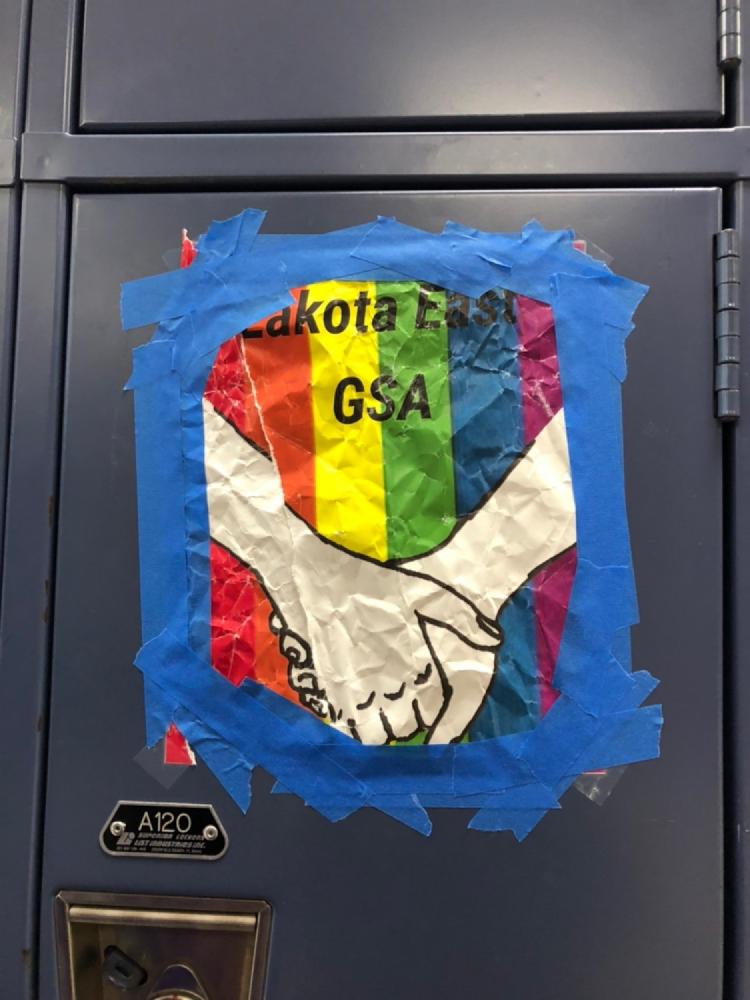 Can’t Tear Us Down

East Freshman Madison LeQuire is just one of several to experience the recent vandalism of Gender and Sexuality Alliance (GSA) posters at the East Freshman campus.

Walking down the halls of the East Freshman campus, students may notice a few different things; tape murals lining the walls, advertisements for clubs sticking to the staircase, and posters clinging to lockers cheering on the basketball team in big, bold letters. The abundant signs seem to stick to every possible inch of space.

With a quick walkthrough, it may seem that there is nothing out of the ordinary, but a ripped rainbow striped poster tells a different story.

The poster is flashing the name of the East Gender Sexuality Alliance (GSA). The East GSA is a club where members of the LGBT community and its allies can gather and support each other. They help build friendships and support among members through biweekly meetings, conferences, events and collaborations with other local schools. The East GSA partners with the Gay, Lesbian and Straight Education Network (GLSEN) for these events and to help build a safer school environment for students of the community.

East freshman Madison LeQuire has been a member of GSA since the beginning of the 2018-19 school year. It was her poster that was torn in the hallway. She had hung up her poster to show that she was proud to be a member of the club. LeQuire didn’t think much of it at first until she noticed it had been ripped the next day.

“[I was] guessing it was a mistake,” LeQuire said. “I put tape on it and called it a day.”

The next day LeQuire found her poster ripped again the following day and she became suspicious. After repairing the poster once more, she continued with her school day. The following morning, before second period, LeuQuire noticed a penciled in “X” marked over the GSA letters on her poster.

“That’s when I started to take the situation more seriously,” LeQuire told Spark.

Despite the “X” being removed with an eraser by a passing student, LeQuire went to the school counselor, who directed her to the School Resource Officer Deputy Todd Cordes to look further into the case. LeQuire says that she has heard no other updates.

East Associate Principal Robert Burnside told Spark that disciplinary action has been taken regarding the vandalism. Burnside explains that like any other school-sanctioned poster, the GSA posters have the same right to be hung and would receive the same action regarding vandalism.

Yet, LeQuire’s GSA vandalism incident is just one of five noted reports to occur this year. Another member of GSA Nate Kodish claims vandalism at both East Freshmen and the Main Campus has been an important topic of discussion at meetings.

“There’s still a lot of vandalism. [GSA has] posters at main campus and banners and stuff and [the posters] keep getting torn down. There’s a lot of kids that will come into the meetings and start talking about what happened to them that day.”

Opinions on the student body’s support of the members in GSA have varied. While Kodish believes that the body’s general response is more negative than it should be, LeQuire has a different view.

“To be honest, I still think that Lakota is generally a safe place for LGBT students. For the most part,  I have been surrounded with support and even this situation is bringing more support to me than hatred,” LeQuire said. “I’m not shocked that there are kids in the [school] community who would do these things, but I am still disheartened by it.”

“I’ve been teaching for 17 years and I’ve seen students go from being really resistant to having students out and talking about being LGBT, or being respectful,” Foldy told Spark. “It’s little steps but every year kids get a little bit more accepting.”

Although Foldy believes acceptance from the student body is a slow progression, she and members are excited about the club’s future. This year the club has participated in events like the GLSEN prom, the Cincinnati Pride Parade, and are hoping to get an LGBT education class approved in upcoming years.

For LeQuire, she has no plans of taking her poster down until the vandalism problem is solved. Even with the negativity surrounding the club, she can’t wait to see where the East GSA goes in the future.

“I see GSA becoming bigger and spreading more awareness and gaining new opportunities every year,” LeQuire said. “And I’m sure 2019 will be no different.”