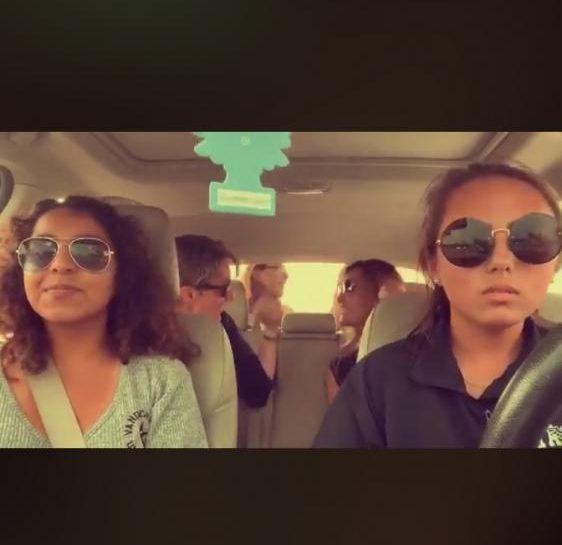 East’s National Honor Society (NHS) has started to combat environmental issues this school year with a campaign represented with the hashtag “Earth2East.” Sept 13 was the first event in the group’s efforts to reduce East’s carbon footprint, a carpool karaoke event.

When planning the carpool karaoke NHS President Ashley Swisshelm hoped that this event would shed light on how the student body can make an impact.

“Our hope is that when we get everyone to submit their videos, we can issue a message,” Swisshelm said. “Yeah, this was super fun, but the reason we did this is to show how something as little as carpooling can easily reduce our carbon footprint.”

Carpool karaoke is a trend started by James Corden, host of The Late Late Show on CBS. Corden would invite different celebrities to drive around with him while singing karaoke to some of their favorite songs.

Participants of the event carpooled to school on Friday morning with friends, and while in park, take a video of themselves doing carpool karaoke. Then, NHS asked them to upload the video to Twitter using the hashtag #EastNHSCarpoolKaraoke. 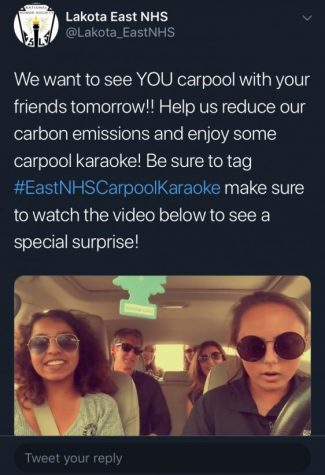 “Not only did it seem like it would be so fun but also gave me a chance to just pause life and have a good time,” Lovejoy said. “There is so much going on in life that sometimes you just need to hit the pause button for a good time.”

When Swisshelm was asked about her goals for the turnout of the event, she had high hopes.

“If we could get a majority of juniors and seniors to do it that would be awesome,” Swisshelm said. “We hoped that a majority of the upperclassmen would participate and potentially get underclassmen who are unable to drive to join the fun.”

Although NHS can’t solve all the environmental problems, it hopes to make a difference doing what they can, no matter how small.

“Carpool Karaoke had the focus of [reducing the carbon footprint] because by publicizing this event of carpooling, that one day saves a lot of fuel for a lot of people,” NHS co-president Tanya Kukreja said. “It saves a lot of carbon emissions for one day.”

Lovejoy, who knew about the event from friends in NHS, also believes that small actions are crucial for the health of the environment.

“The environmental approach really important in the world right now,” Lovejoy said. “A lot of people aren’t informed on what is going on with the planet, little things have to make them aware.”