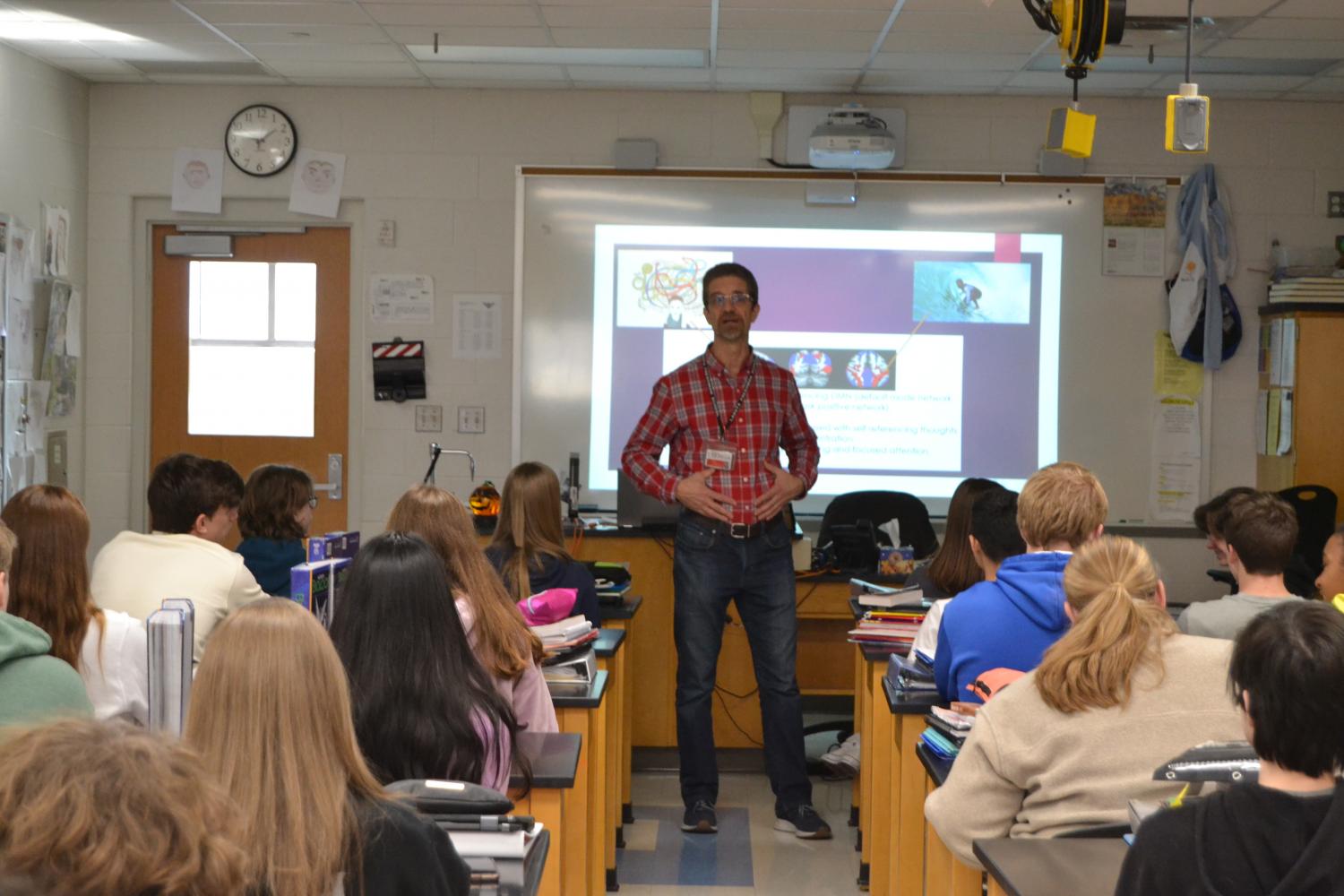 He takes a deep breath as he guides the closed-eyed students in his Honors Biology class through a mindfulness exercise, instructing them to take their right pointer finger to slowly trace the outline of their left hand.

East Honors Biology teacher and certified yoga instructor Glenn Terndrup is branching out from the traditional path of education to introduce mindfulness and yoga practices to his high school students. Terndrup has 200 hours of yoga teacher training certification at Drishtiq, the studio where he practices, as well as an undergraduate degree in biology education, and a master’s in secondary education.

Terndrup’s journey to yoga began with a rented DVD from the public library, which then led to a discovery of mindfulness. Mindfulness is a mental state achieved by focusing one’s awareness on the present moment, while calmly acknowledging and accepting one’s feelings, thoughts, and bodily sensations.

“I was listening to a series on anxiety and they talked about how if the mind is wired a certain way, you tend to have more anxiety,” Terndrup said. “All of the sudden I realized, this is the way my brain is wired. Instead of thinking this is the way things are, I realized I needed to find techniques that would help me step out of the wiring of my brain.”

When Terndrup was a freshman in high school, he experienced one of the crippling roadblocks that 248 million people worldwide experience: anxiety. His discovery of mindfulness at 47 years old led to the school requesting that he implement mindfulness practices into his classroom, and his students seemed to receive it well.

“Last year I had one person who said they were getting ready to do a recital or music contest, and they were really nervous,” Terndrup said. “They [told me they] started doing deep breathing and they felt themselves calm down.”

Not only has East administration enforced Terndrup’s mindfulness practices as part of his personal professional development plan, the school has also introduced a meditation session to the XH, or study hall periods on block days as a way to further bring the benefits of mindfulness to students.

East Junior Allison Browning made her way down to the auxiliary gym for the sessions, and said the meditation even lulled some people to sleep.

“It’s really great to dedicate that time to take care of yourself because I’ll be honest, we don’t do enough of that outside of school,” Browning said. “We’ve got sports, we’ve got homework, we’ve got family obligations, we’ve got jobs, and there’s so little time that we actually sit down and relax.”

Drishtiq yoga instructor Deb Bagely has been joining East students in XH to guide them through lulling meditations. Bagley has been practicing yoga for 17 years, and been a teacher for seven. She acquired 200 hours of yoga teacher training to be a certified instructor, and is currently working on 300 more hours. Bagley recognizes the importance of being able to turn the mind off, for teenagers specifically.

“I love working with kids, especially young adults. I find it really important for adolescents and teens to know what it is to actually be relaxed and to be able to turn off everything that’s going on around them,” Bagley said. “Guided meditations are a really easy access point for most students.”

Fighting anxiety hasn’t exactly been smooth sailing for Browning, who is still on a journey to find coping mechanisms that work for her.

“As far as my research, I’m severely anxious and mildly depressed,” Browning said. “Both my parents had bad childhoods, which affected their mental health, and it’s this big snowball effect. But I’m trying to break apart that snowball, I’m taking care of myself.”

The Cleveland Clinic provides website support, and shows that the frontal lobe of the teenage brain is still developing during teenage years, which means it often doesn’t communicate well with the amygdala, or the part of the brain responsible for emotions. East School Psychologist Jayna Rodarte says there’s a correlation between meditation and these parts of the brain.

“Mindfulness and meditation can help teens strengthen decision making skills, attentional control, and emotional regulation,” Rodarte said. “Studies have suggested this happens because it improves communication from the amygdala and the frontal lobes of the brain”

Trauma can oftentimes largely invoke spouts of anxiety, which Bagely has discovered in her lifetime. The peacefulness of yoga was a welcome friend that helped her cope.

“I almost lost my mom and my husband’s parents, I had a daughter that was trying to kill herself; it was a really difficult time,” Bagely said. “I didn’t really understand what it was about yoga that made me think it was the place I could breathe and have some space.”

According to Teenmentalhealth.org, one in five teenagers suffer from mental illness, or 20% of our population. What Terndrup and Bagley hope to do is show kids there is another way to fight out of the jail of anxious thoughts.

“Kids have fallen into that trap of not being able to sit with emotions or see them for what they are,” Bagely said. “I think with students that desire to escape this, the level of stress or the sadness of anxiety has led to looking for other other ways [to escape their illness]. But mindfulness and meditation draws you back to seeing that you have control over your thoughts and you can make a better choice for yourself.”

One tactic Terndrup uses to aid his freshman students with meditation is diaphragmatic breathing. In the way humans typically breathe, we stay in sympathetic mode, which is a shallow breathing technique that slightly instigates a fight or flight response, Terndrup said. Deep breathing engages the parasympathetic system, which means the nervous system calms down.

Although Terndrup tries to give his students as many tools as possible, he has his speculations about the cause of mental illnesses.

“Social media causing kids to compare themselves is—from what I’ve heard from the experts—a huge problem. The internet has an ability to consume our attention,” Terndrup said. “I don’t think kids have the type of downtime that they need in their mind where they’re just calming their mind. There’s always something to stimulate the mind.”

Bagely would agree that mindfulness is an important practice for adolescents to calm their racing minds and find peace in every day.

“I usually explain it like a puppy. You’re not supposed to treat the mind like, ‘you have to sit’, ‘you’ve got to stop this,’ ‘you’ve got to be quiet,’” Bagley said. “It’s more about watching the puppy start to wander, and coming back there to anchor to your breath, [and the] sensations you have in your body. And with that, reining the puppy back over and over and over again. That’s the key to really being able to understand that we don’t have to respond to every thought that comes into our mind.”

Mindfulness has made its impact on Browning, who says she was reintroduced to meditation during the XH sessions and is trying to implement it more and more.

“I was having a lot of issues with friends,” Browning said. “Being able to zone out for 40 minutes, go into my mind, and just relax was really helpful. It helped me refocus myself for the rest of the day, and be more aware of myself.”

Terndrup hopes to help teens combat anxiety with mindfulness by encouraging them to step out of their brains and notice things about the way they think.

“My ultimate goal would be to get [students] to be observers,” Terndrup said. “We get down on ourselves or we condemn ourselves for our behavior instead of just being curious. I think curiosity is a better approach. [For example], ‘Why am I doing this,’ and ‘that was kind of weird,’ or ‘I wonder what my brain is trying to do.’”